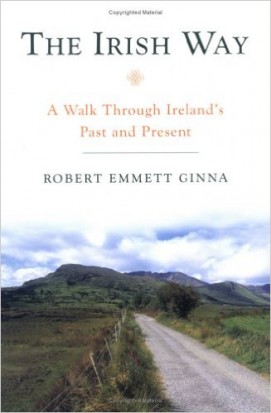 A Walk Through Ireland's Past and Present

In this masterpiece of travel literature, Robert Emmett Ginna travels on foot the 350 miles from one end of Ireland to the other. His walk is filled with encounters with remarkable citizens, as colorful and various as the counties of Ireland. Weaving song, poetry, and story into his narrative, he brings to life the heroes, patriots, saints, and rogues who’ve shaped Ireland’s culture and history. Here is Ireland as you’ve never seen it before.

Robert Emmett Ginna has written essays and articles about Ireland for Connoisseur, Esquire, and The New York Times. In Ireland he has produced two films and a documentary. Formerly editor in chief of Little, Brown, he has taught film and writing courses at Harvard for many years. He lives in Sag Harbor, New York.

Praise
"Ireland remains the perfect country to read and write about, because every inch of it is different, yet every inch is typical. And everything is within walking distance--if not by you, then by a surrogate like Robert Ginna, whose new book, "The Irish Way, is as good as a hike though the whole time and space of Ireland with a man who not only knows all there is to know about it but seems to learn something new every minute: in other words, an Irishman, complete with contradictions (he's actually American) and great conversations and with a wonderfully exhilarating book up his sleeve."--Wilfrid Sheed
"This marvelous walk down the full length of Ireland is the journey of a lifetime. Robert Ginna takes you along with him into the ruined abbeys, the villages and towns, the great houses with their extraordinary histories, the talk-filled pubs, and, more than this, into the soul of the country.
"The fierce and bloody past with its sorrows, the beauty of the land and its rivers, the open-heartedness of the people, are all grandly revealed by a matchless guide."--James Salter