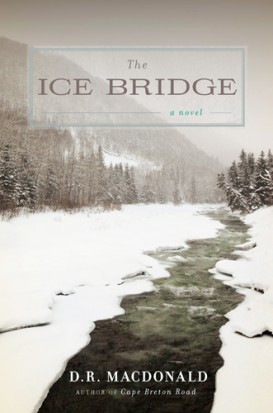 Anna Starling flees a dissolving marriage in California to save herself and her artistic career, and rents a house in the isolated landscape of Cape Breton. There, her life intersects with that of her neighbor Red Murdock, a cabinetmaker who has recently lost Rosaire, the great love of his life, to cancer. Surrounded by the old ghosts of this landscape and the echoes of the indigenous Scottish culture that once lived in this isolated community, Anna and Murdock slowly come together just as the modern world encroaches on their town. When a local drug–smuggling ring starts to impede on their natural landscape, Anna finds herself caught in the crosshairs, and both she and Murdock must shake off the past in order to contend with the dark forces swirling all around them.

Part love story, part moral fable, and part quest for home and heart, The Ice Bridge is a superbly crafted tale of love after love, a novel rich in atmosphere and infused with lyrical descriptions of land and sea. It is about timeless characters caught in a distinctly modern world. Written with an ear for the cadences of Cape Breton and a profound understanding of the many emotional shadings that exist between the sexes, The Ice Bridge is another superb work from D.R. MacDonald.

D. R. MacDonald was born in Cape Breton and grew up mostly in the United States. He has received two Pushcart Prizes, an Ingram Merrill Award, and an O. Henry Award for his short fiction. His first novel, Cape Breton Road, was called a jewel of literary craftsmanship by Scott Turow, a book of heart-stopping beauty by Alistair MacLeod, and became a national bestseller. His second novel, Lauchlin of the Bad Heart, was longlisted for the Giller Prize. MacDonald teaches at Stanford University and spends his summers in Nova Scotia.

Praise
Praise for The Ice Bridge:

"The Ice Bridge is a breathtaking novel about the landscape of love and spirit and a particularly special place, a book of considerable intrigue and remarkable beauty." —Scott Turow

"[The Ice Bridge] transcends clichés in its depiction of an isolated community contending with a magnificent and at times overwhelming natural landscape. It also grapples with the global socioeconomic forces undermining communities of all sizes with far more subtlety and insight than most urban fiction…in prose reminiscent of D. H. Lawrence, MacDonald captures the almost hopeless struggle to comprehend the consciousness of another person and another time." —Quill & Quire