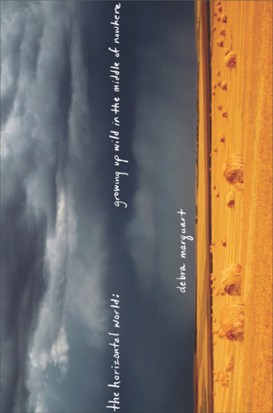 Growing Up Wild In the Middle of Nowhere

Debra Marquart grew up on a farm in rural North Dakota—on land her family had worked for generations. From the earliest age she knew she wanted out; surely life had more to offer than this unyielding daily grind, she thought. But she was never able to abandon it completely.

“[A] rich memoir, set in North Dakota, about growing up on and escaping from a family farm for a future that held once unheard–of opportunities as a rock musician, poet, and English teacher.” —Chicago Sun–Times

Debra Marquart is a professor of English at Iowa State University. Her work has received numerous awards and commendations, including the John Guyon Nonfiction Award, the Mid-American Review Nonfiction Award, The Headwater's Prize, the Shelby Foote Prize for the Essay from the Faulkner Society, a Pushcart Prize, and a 2008 NEA Creative Writing Prose Fellowship among others. Marquart's memoir, The Horizontal World: Growing up Wild in the Middle of Nowhere, received the Elle Lettres award from Elle magazine, a New York Times Editors' Choice recommendation, and the 2007 PEN USA Creative Nonfiction Award. Marquart is also the author of two poetry collections--Everything's a Verb and From Sweetness--and a collection of interrelated short stories, The Hunger Bone: Rock & Roll Stories, which draws on her experiences as a female road musician.

Praise
"The author's elegant, understated sentences are as fertile as freshly tilled rows of loam."