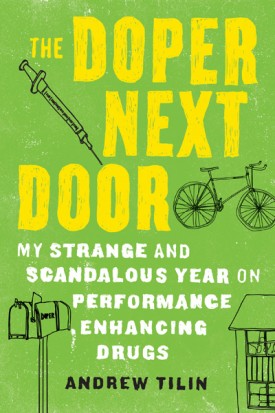 The Doper Next Door

What happens to a regular guy who dopes? Surprised to learn that pro athletes aren’t the only ones taking performance–enhancing substances, journalist Andrew Tilin goes in search of the average juicing Joe, hoping to find a few things out: Why would normal people take these substances? Where do folks get them? Does the stuff really work?

But these controversial drugs often silence their users, and so his queries might have gone unanswered had Tilin not looked in the mirror and succumbed to curiosity. Soon wielding syringes, this forty–something husband and father of two children becomes the doper next door.

During his yearlong odyssey, Tilin is transformed. He becomes stronger, hornier, and aggressive. He wades into a subculture of doping physicians, real estate agents, and aging women who believe that Tilin’s type of legal “hormone replacement therapy” is the key to staying young—and he often agrees. He also lives with the price paid for renewed vitality, worrying about his health, marriage, and cheating ways as an amateur bike racer. And all along the way, he tells us what doping is really like—empowering and scary.

Andrew Tilin has written for many publications, including The New York Times, Wired, and Yoga Journal. He was a senior editor at Business 2.0 and Outside magazines, and is a contributing editor for Outside. He is the co-author, with Reed Timmer, of Into the Storm. He lives in Oakland, California.

Praise
Praise for The Doper Next Door

"Tilin [enters] the shady world of the "anti–aging" industry, populated with past–their–prime jocks and fading beauties, "Dr. Iffys," hucksters, and much confusing and contradictory information on the effects, positive and dangerous, of rubbing testosterone cream on one's private parts and injecting other drugs in search of better performance on the road, in bed and in the mirror. Tilin is an engaging writer, and even though he wades into an arena ripe for mockery, he provides mostly gentle portrayals of the people he meets during his testosterone–boosted year." —San Francisco Chronicle

"For the voyeur." —Bicycling magazine

"Andrew Tilin took on a risky, difficult assignment when he decided to act as his own guinea pig—in a clandestine study of the powerful effects that supplemental testosterone can have on a weekend athlete and family man. The result is amazing: an incredible thrill ride through the back alleys of sports doping, hormone replacement, and anti–aging medicine. The Doper Next Door is participatory journalism at its best."
—Alex Heard, editorial director at Outside magazine and author of The Eyes of Willie McGee

"Andrew Tilin plunges fearlessly into a culture that we hardly new existed, one in which a hopped–up citizenry's high hopes and false heroes trump all else, and enlists in a first–hand reckoning with the real questions we should be asking about performance enhancing drugs. There are no easy answers—just the challenge of deciding who's cheating whom."
—Eric Hagerman, co–author of Spark: The Revolutionary New Science of Exercise and the Brain

"Andrew Tilin's story is as complex and challenging as the issue he tackles head on—the modern, and unfortunately ubiquitous, scourge of performance–enhancing drug use."
—Bill Strickland, editor–at–large of Bicycling magazine and author of Ten Points

"In The Doper Next Door, Andrew Tilin personally explores the astonishing powers and frightening side–effects of performance–enhancing drugs. The result is an eye–opening, eyebrow–raising, immensely troubling, and yet often hilariously funny sports memoir. In the tradition of George Plimpton, this is a sterling work of participatory journalism—a carefully reported and deeply experienced book that takes us behind the hot outrage of the headlines and into the very bloodstream of the modern sports world."
—Hampton Sides, editor–at–large Outside magazine and bestselling author of Hellhound On His Trail

"The Doper Next Door is a brain–enhancing drug of a book: harrowing, powerful, freaky, wondrous, and wise. I couldn't put it down."
—Daniel Coyle, bestselling author of Lance Armstrong's War and The Talent Code