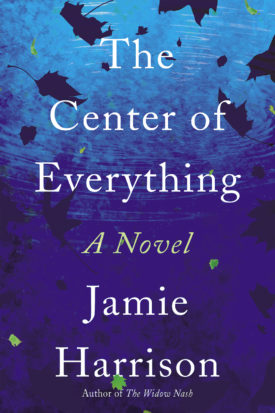 The Center of Everything

In this compelling family drama set against the dangerous beauty of the Yellowstone, Polly is still trying to get her life back on track after a recent accident, not always trusting reality.

For Polly, the town of Livingston, Montana, is a land charmed by natural beauty and a close network of family extending back generations. But a recent head injury has scattered her perception of the present, surfacing events from thirty years ago and half a country away. As Polly’s relatives arrive for a family reunion during the Fourth of July holiday, a beloved friend goes missing on the Yellowstone River, dredging up difficult memories for a family well acquainted with tragedy.

A generational saga from the award-winning author of The Widow Nash, The Center of Everything offers a stunning and heartfelt examination of the deep bonds of family and how the ones we love (and the secrets we keep) echo throughout our lives.

JAMIE HARRISON, who has lived in Montana with her family for more than thirty years, has worked as a caterer, a gardener, and an editor. She is the author of five previous novels--the Jules Clement series of mysteries and The Widow Nash, a finalist for the High Plains Book Award and the winner of the Mountains & Plains Independent Booksellers Association Reading the West Book Award. Find out more at jamieharrisonbooks.com.

Prasie for The Center of Everything

"Despite various mysteries and suspicious deaths in this story about a Montana woman uncovering secrets past and present, Harrison wisely concentrates less on plot twists than on exploring the trickiness of memory where love and family are concerned . . . Through small moments, particularly shared meals and drinks, the reader becomes intimately involved in Polly's inner life and falls in love with a vividly portrayed Montana devoid of Western clichés. A sharply intelligent, warmhearted embrace of human imperfection--the kind of book that invites a second reading." --Kirkus Reviews (starred review)

"This doesn't feel like a work of fiction. It feels real, like reading someone's diary. I'm left convinced that these characters have immortal souls, and I find comfort in their familiarity. I want to spend more time in their world, urging them to whisper their secrets in my ear. A brilliant book--I wish I could write like this." --Jamie Ford, New York Times bestselling author of Hotel on the Corner of Bitter and Sweet

"The Center of Everything slips deftly through time, all the while taking the reader to the marvelous unfolding of secrets (both wondrous and murderous) that were right before our eyes. How beautifully our attention is distracted and illuminated in this resonant novel." --Joan Silber, author of Improvement

"The Center of Everything is a bighearted, feet-on-the-ground, bracing, intelligent book. Its people will endure in readers' memories, page after compelling page." --Thomas McGuane

Praise for The Widow Nash

"This novel from the daughter of Jim Harrison features a character set loose to wander the American West at the turn of the 20th century, a woman whose early experiences seem drawn from the worldly peregrinations of the era of Henry James. Sweeping and richly hued . . . Harrison has rendered her imagined world anachronistically, but Henry James might still have approved." --The New York Times Book Review

"What keeps you reading is not just the quality of the writing, which is just absolutely wonderful, but also to find out: Is [Dulcy] going to [remake herself]? Can this be successful? Or is she going to be found out?" --Nancy Pearl, Morning Edition, NPR

"Debut novelist Harrison paints a lovely and memorable portrait of a desperate woman's flight to a new life . . . Harrison's lead is a strong and clever woman who is easy to admire, while the rest of the heroes, villains, and ambiguous sorts are as vividly drawn as the raw and terrible scenery of Montana. Readers will treasure Harrison's rich characterization and sharp turns of phrase." --Publishers Weekly (starred and boxed review)

"Jamie Harrison . . . shares a number of traits with her father [Jim Harrison]--superior storytelling skills, love of landscape, wry humor, and a knack for gorgeous writing about food. The Widow Nash reverberates with a daughter's affection for a larger-than-life father, surely a tribute of sorts to a real-life relationship." --Newsday

"With loads of drama (murder! theft!) and an empowering message, this guy is pretty unputdownable." --PureWow

"[Jamie Harrison] is really great for those people who like historical novels but also like a page-turner . . . By the end you're just racing through the pages, trying to find out what happens to [Dulcy]." --MTPR's "The Write Question," 1 of 28 Books for Everyone on Your Holiday Shopping List

"This is a rich and interesting story about a young woman in America in the early 20th century who takes her life in her own hands and makes the decision to choose herself rather than succumbing to what is expected of her . . . I cannot imagine a reader who wouldn't be entranced by her story." --Historical Novel Society

"When Walton dies before anyone can figure out what's happened to Victor's money, Dulcy decides that her only option is to disappear. Thus, Dulcy Remfrey turns herself into the young widow Mrs. Nash. This baroque setup is nicely balanced by Harrison's prose; the narrative voice here is restrained, with just a hint of quiet irony. And there's the fact that, as fantastical as the scenario might seem, Walton Remfrey is an entirely believable Gilded Age figure . . . Thoughtful, richly written historical fiction" --Kirkus Reviews

"Harrison . . . writes atmospheric historical fiction featuring both drama and bizarrely entertaining humor. There are Whartonesque touches in the demarcations of society . . . A subtler comedy of errors among a quirky cast of characters." --Booklist

"Readers prizing action above all may appreciate this Western saga by the daughter of author Jim Harrison." --Library Journal

"Richly descriptive, The Widow Nash is the luminous story of a woman suspended between two worlds, one promising, the other catastrophic." --BookPage

"With The Widow Nash, Jamie Harrison breathes fresh life into a fascinating period of American history. Indeed, the past has not passed. An adventurous, ambitious, inventive novel by a writer to relish." --Colum McCann, winner of the National Book Award for Let The Great World Spin

"This deliciously ambitious novel delivers one memorable character after another. None is more magnetic than the 'Widow Nash' herself, a fabulous heroine and irresistible travel companion. Jamie Harrison is a clever, gifted writer, and this shining book is flat-out terrific." --Carl Hiaasen, New York Times bestselling author of Razor Girl

"With Technicolor, vibrant prose, Jamie Harrison's novel The Widow Nash re-invents the Western from a feminist perspective; from the first page, the fierce Dulcy brings the reader into her unforgettable world. A novel as wildly original and memorable as the West itself." --Karen E. Bender, author of Refund, a Finalist for the National Book Award

"If an Edith Wharton heroine had decided to ditch the bustles and the propriety and simply lit out for a fresh start in the Territories, she might have called herself The Widow Nash. Jamie Harrison has turned her formidable talents to breathing life into just such a creature, with astonishing results. Not only do we get a pitch-perfect evocation of a prior time, but a subtle reworking of America's great central myth--and its inheritor, Dulcy Remfrey, is so well rendered as to make you forget you're reading about any particular era at all. That's the mark of greatness." --Malcolm Brooks, author of Painted Horses

"From the profoundly generous and encyclopedic mind of Jamie Harrison comes a compelling novel of reinvention and the seismic sacrifices we make for difficult family. Every page contains a new historical and emotional discovery. Harrison is a true original, and she gives us a father-daughter love story for the ages." --Sheri Holman, author of the New York Times bestseller The Dress Lodger

"A languid yet intriguing read . . . Harrison has debunked the idea that women in the early 1900s had no control over their lives and only looked to men for direction and happiness. There is a love story but it is not standard, and Dulcy certainly isn't dependent upon a man to rescue her. All of the characters have the kind of quirks that feel natural to the reader. No one character is perfect, and Harrison shines at creating a cast of friends and associates that I would happily spend an evening drinking and chatting with . . . Harrison is artful in her writing and most of the events influence the plot in important ways . . . The Widow Nash delivers an excellent story. Harrison has crafted an atmospheric historical novel with original characters for readers to enjoy. Her writing is sophisticated and quick witted, ideal for a pleasurable summer read." --The Missoulian

"Depth and breadth of awareness are the hallmarks of the new novel, The Widow Nash . . . An exceptional literary feat . . . From start to finish we are treated to her splendid observations and memories--product of Harrison's astonishing pen--the trips, sights, people, disasters and miracles she has encountered across the world. By the close we are given to see Dulcy address what she has most regretted losing, not the riches, perhaps, but a life hers to live." --Livingston Enterprise

"Blue Deer, Mont., cradled between the Absaroka and the aptly named Crazy mountain ranges, makes a fine setting for this debut mystery that is by turns side-splitting and dark." --Publishers Weekly

"I absolutely loved it." --James Crumley, author of The Last Good Kiss

"You haven't been West in any meaningful way until you've been to Blue Deer, Montana." --The New York Times Book Review

"As in her first mystery, The Edge of the Crazies, Harrison mingles dark and (sometimes strange) comic elements to good effect. She is a dab hand at creating an assortment of characters, tossing them together, giving them something to squabble over and setting them loose and if some end up dead, well, that just gives droll, intelligent Jules a way to earn his keep." --Publishers Weekly

"Harrison's sequel to The Edge of the Crazies begins with a double murder near the small Montana town of Blue Deer. Sheriff Jules Clement, not exactly a gung-ho lawman, nevertheless feels compelled to track down the ex-con and woman-abuser probably responsible. The investigation involves detailed and wryly humorous analysis of the locals and often nefarious dealings with a fancy new resort development. The plot progresses intimately, in a manner reminiscent of television's Northern Exposure. Recommended." --Library Journal

"And as in Harrison's toothsome debut, there's a double helping of zany locals, strewn across the landscape like so many jumping beans . . . this second helping of Blue Deer madness will keep you cheering Absaroka County's status as Montana's murder capital while you're waiting for the franchise's next move." --Kirkus Reviews

Praise for An Unfortunate Prairie Occurrence

"Harrison [allows] us to linger in Blue Deer long enough to learn its history, drink in the scenery and laugh at the kinks and quirks of its idiosyncratic resident . . . the place is heaven." --The New York Times Book Review

"The fourth book in the Blue Deer series is another gem." --The Washington Post

"Lively, hilarious . . . not to be missed by devotees of good writers with an exquisite sense of humor." --Kirkus Reviews

"This warm and witty look at an amazing assortment of characters ought to popularize a certain corner of Montana; highly recommended." --Library Journal