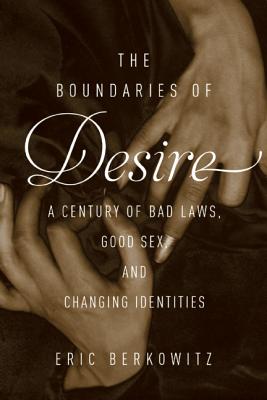 The Boundaries of Desire

A Century of Bad Laws, Good Sex and Changing Identities

The act of reproduction, and its variants, never change much, but our ideas about the meaning of sex are in constant flux. Switch a decade, cross a border, or traverse class lines and the harmless pleasures of one group become the gravest crimes in another.

Combining meticulous research and lively storytelling, The Boundaries of Desire traces the fast–moving bloodsport of sex law over the past century, and challenges our most cherished notions about family, power, gender, and identity.

Starting when courts censored birth control information as pornography and let men rape their wives, and continuing through the “sexual revolution” and into the present day (when rape, gay rights, sex trafficking, and sex on the internet saturate the news), Berkowitz shows how the law has remained out of synch with the convulsive changes in sexual morality.

By focusing on the stories of real people, Berkowitz adds a compelling human element to what might otherwise be faceless legal battles. The law is made by people, after all, and nothing sparks intolerance – on the left and right –– more than sex. Ultimately, Berkowitz shows the emptiness of sanctimonious condemnation, and argues that sexual questions are too subtle and volatile for simple, catch–all solutions.

Huffington Post, AlterNet and Salon. He has been interviewed widely for radio and television including for the History Channel's recent 9-partseries, How Sex Changed the World. He lives in Los Angeles, California.
Praise
Praise for Boundaries of Desire

"Because sexual conventions tend to shape legislation rather than the reverse, sex law always lags behind our actual sex lives. As Berkowitz asserts, this leaves the former in a perpetual state of crisis. Time and time again, Berkowitz shows that sex laws are like ghosts, tormenting the living long after their own times have passed."—Slate

"A bracing look at the often–strange relationship between sexuality and the legal system over six tumultuous decades."—Booklist

"an eye–opening history of sexual legislation....Berkowitz makes legal history readable, not relying on the subject matter being salacious (which this book is not) but accessibly conveying sophisticated topics and complex events with the assurance of an expert....Readers will be sad to arrive at the end of this skillful piece of popular history."—Publishers Weekly Starred Review

"Sagely, Berkowitz throws some much–needed light on the still–shadowy definition of obscenity ...The author cogently exposes what he believes is "panic mentality" in many cases of rape and child molestation. As laws and mores continue to change at a rapid pace, this engaging study offers helpful historical and legal explanations."—Kirkus Starred Review

"This very well written, crisp, and clear description and analysis of American sex law deserves a wide readership. The laws relating to homosexuality, gender change, sexual activity by minors, prostitution, abortion and contraception, proof of sexual coercion and abuse, punishment (including post–release restrictions), and religious objections to various sexual activities and preferences, are disputed, confused, and conflicting, frequently obsolete, and on the whole probably too severe. The book lays out these problems concisely, and should stimulate a more active search for solutions." —Richard A. Posner, Judge Seventh Circuit Court of Appeals; Senior Lecturer, University of Chicago Law School; Author, Sex and Reason and A Guide to American Sex Laws

"There may be no facet of human experience as riddled with accusation, judgment, and shame as sex. In lively, passionate prose, legal scholar Eric Berkowitz shows how irrational, unjust, and destructive even well–intentioned attempts to legislate lust can be. This controversial book is as mind–blowing as it is heart–opening."—Christopher Ryan, author of Sex at Dawn: How We Mate, Why We Stray, and What It Means for Modern Relationships

"A gripping account of how the law has enforced the sexual subordination of women, children, minorities and GLBT people –– and a thought–provoking appraisal of how new legal efforts to protect victims can backfire. In this fascinating read, Eric Berkowitz tells the human stories behind the law." –– Stephanie Coontz, author of The Way We Never Were: American Families and the Nostalgia Trap