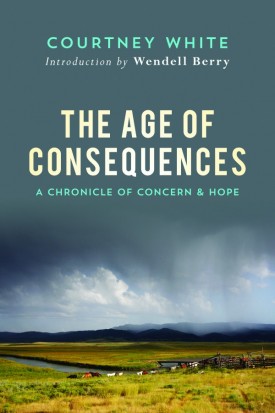 The Age of Consequences

A Chronicle of Concern and Hope

Our planet is approaching a critical environmental juncture. Across the globe we continue to deplete the five pools of carbon – soil, wood, coal, oil, and natural gas – at an unsustainable rate. We’ve burned up half the planet’s known reserves of oil – one trillion barrels – in less than a century. When these sources of energy–rich carbon go into severe decline, as they surely will, society will follow.

Former archeologist and Sierra Club activist Courtney White calls this moment the Age of Consequences—a time when the worrying consequences of our environmental actions– or inaction – have begun to raise unavoidable and difficult questions. How should we respond? What are effective (and realistic) solutions?

In exploring these questions, White draws on his formidable experience as an environmentalist and activist as well as his experience as a father to two children living through this vital moment in time. As a result, The Age of Consequences is a book of ideas and action, but it is also a chronicle of personal experience. Readers follow White as he travels the country ––– from Kansas to Los Angeles, New York City, Italy, France, Yellowstone, and New England.

A former archaeologist and environmental activist, Courtney White is the co-found the Quivira Coalition, a nonprofit dedicated to building bridges between ranchers, conservationists, public land managers, scientists and others around practices that improve land health. Today, his conservation work focuses on building economic and ecological resilience on working landscapes, with a special emphasis on carbon ranching and the new agrarian movement. He is the author of Revolution on the Range: the Rise of a New Ranch in the American West and Grass, Soil, Hope: a Journey through Carbon Country. He lives in Santa Fe, NM.

Wendell Berry is the author of over fifty books of poetry, fiction, and essays. He lives with his wife in Kentucky.

Praise
"Hope in a book about the environmental challenges we face in the 21st century is an audacious thing to promise, so I'm pleased to report that Courtney White delivers on it."—Michael Pollan

"What we have in Courtney White's book is a recording of one passing phase of that frontier. And what a pleasure it is to see the real Wests captured in their flow! What a reassurance it is to see the Wests recorded in their living reality, instead of getting another view of someone being cut off at the pass in the Alabama Hills of the Kanab Desert, shooting wildly with both hands from guns that never need re–loading."—Wallace Stegner

"I have asked Courtney White to lend his essay 'The Working Wilderness' to this collection for three reasons: First, I think it is a good essay. Second, it tells of a serious and continuing effort on the part of some ranchers and conservationists to develop local knowledge sufficient to support a locally adapted land economy. This is an effort that is needed simply because it is necessary . . . Third, it is an essay about cooperation between people and nature, between people and their places, and between ranchers and conservationists. This, again, is necessary . . ."—Wendell Berry

"Courtney White has lived and worked at the radical center of collaborative conservation in the West for more than two decades, literally re shaping dialogue and land stewardship in the region through his innovations. But with this book Courtney demonstrates that his own essays on these concerns can rightfully take its place alongside Scott Russell Sanders, Peter Forbes, Richard Nelson and Wendell Berry for its eloquence, depth and lasting impact on the conservation movement."—Gary Nabhan