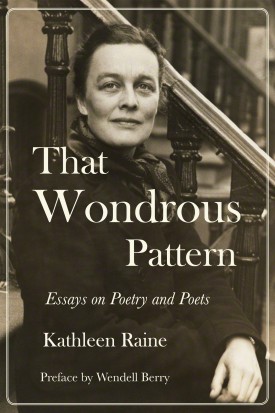 Essays on Poetry and Poets

“There is no exaggeration in pointing out that these essays are addressed to the soul of the reader. They are not academic exercises in erudition as a contribution to ‘Eng. Lit.’” —from the introduction by Brian Keeble

Kathleen Raine was one of the greatest British poets of the last century. Born to a deeply literary and spiritual household, she went on to study at Cambridge, where she met Jacob Bronowski, William Empson, and Malcolm Lowry. A dedicated neoPlatonist, she studied and presented the works of Thomas Taylor and wrote seminal books on William Blake. With Keith Critchlow, Brian Keeble, and Philip Sherrard, she founded, in 1981, the Temenos Academy of Integral Studies, its journal Temenos, and, later, the Temenos Academy Review. HRH The Prince of Wales became the patron of the academy in 1997.

For our new selection, That Wondrous Pattern, Raine offers sixteen essays that range from “The Inner Journey of the Poet” and “What Is Man?” to essays on Blake, Wordsworth, Hopkins, Yeats, Eliot, and several others. The centerpiece, “What Is the Use of Poetry?”, is a rigorous defense of the great art. Editor Brian Keeble himself contributes a fascinating introduction to Raine’s work, and Wendell Berry, a colleague and friend of hers, offers a preface.

All who spend time in the presence of this wonderful writer will leave newly entranced with the art and use of the beautiful, convinced that “it is only in moments when we transcend ourselves that we can know anything of value.

Born in Ilford, Essex in 1908, Kathleen Raine was raised by her father, a schoolmaster, and her Scottish mother, who shared her devotion to poetry with her only child. Author of more than thirty books, her honors and awards included the CBE and the Queen's Gold Medal for Poetry. Her books include Defending Ancient Springs, The Human Face of God, and her Collected Poems, published in 2000. She died in 2003 at the age of 95.

Brian Keeble is a British scholar, educator, editor, and author. His best known book is probably Art: For Whom and For What?, but he has more recently authored God and Work: Aspects of Art and Tradition (World Wisdom, 2009). Keeble is the founder of Golgonooza Press and co-founder of Temenos Academy. The latter is sponsored by The Prince's Foundation of HRH The Prince of Wales, and is a teaching organization dedicated to the same central idea that had inspired the earlier Temenos Review./p>

Praise
"A meditative, intimate, feminine poet with a real gift. . .They are thoughtful poems, full of ideas and feeling for Nature." —Cyril Connolly