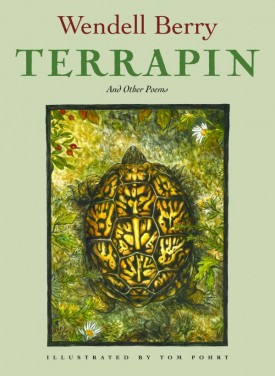 Tom Pohrt spent years gathering poems by Wendell Berry that he thought children might read and appreciate, making sketches to accompany his selection. Terrapin is the result, a volume of twenty–one poems with dozens of sketches, drawings, and watercolors. In full color, we have not only a volume of staggering beauty but a consummate example of the collaborative effort that is fine bookmaking; the perfect gift for children, grandchildren, or anyone who remains a lover of the book as physical object.

Praise
"Wendell Berry writes poetry as if it were as essential as bread....[He] doesn't coax poetry out of the ordinary — a long term marriage, a wild rose, trees — he shows us it's been there, in front of us, all along.... [Terrapin] is a lovely gentle primer for the Berry novice or any reader who relishes a handsome, decidedly old fashioned book."—Leo Weekly