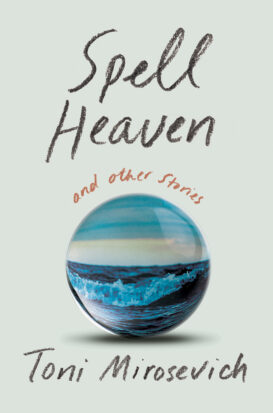 In Spell Heaven, a linked story collection, a lesbian couple moves to a coast town and unexpectedly finds a sense of belonging with a group of outsiders.

Stories include the tale of an undocumented boy’s drowning when a wave pulls him out to sea, an ex–FBI agent’s surveillance of a man who leaves chocolate bars at a tree in a weekly ritual, a mother on meth who teaches a lesson on mercy, and Kite Man, who flies kites from a fishing pole and sells drugs on the side. His motto: When the kites fly, you can buy.

The narrator of these stories, raised in a working-class Croatian American fishing family and immigrant community, chooses an early career in labor-oriented jobs. Years later, she finds herself in an academic position in a white-collar world “where the clothes are clean but the politics are dirty.” She questions her own stereotypes about her neighbors and gradually begins to question her life path. Spell Heaven celebrates those who are looking for a human connection in an increasingly isolated world.

TONI MIROSEVICH was raised in a Croatian American fishing family in Everett, Washington. She is the author of a book of nonfiction stories, Pink Harvest, winner of the First Series Award for Creative Nonfiction, and five books of poetry. A professor of creative writing at San Francisco State University for many years, she currently resides with her wife in Pacifica, California.