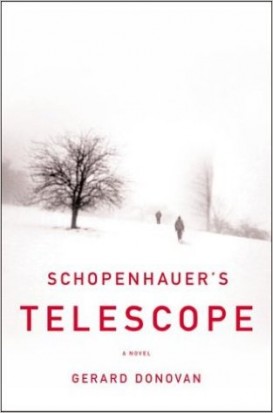 Digging a grave during a European civil war, two men share their experiences and draw conclusions about why the history of civilization is inseparable from the history of mass violence.

In an unnamed European village, in the middle of a civil war, one man digs while another watches over him. Slowly, they begin to talk. Over the course of the afternoon, as the snow falls and truckloads of villagers are corralled in the next field, we discover why they are there–not just who they are but also how sinister events in the country have led them to be separated by a deepening grave, and why the history of civilization is inseparable from the history of mass violence.

Beautifully written, with a poet’s eye for detail coupled with a chilling and compelling narrative drive, Schopenhauer’s Telescope is current in the best sense–no thin allegory of today’s conflicts, but a remarkable attempt to make art out of the brutality of life.

“The haunting novel Schopenhauer’s Telescope . . . [is] one of the most unusual novels of the year . . . The effect is pulse-quickening and horrific, as though we’ve been force marched through a theme park of grotesque monsters.” —Newsday

Gerard Donovan was born in Ireland and has lived in Germany and New York. His award-winning poetry has been widely published. A graduate of The Johns Hopkins Writing Seminars and the University of Arkansas Writing Program, he teaches English at Southampton College of Long Island University and lives in Calverton, New York.

Praise
"The haunting novel Schopenhauer's Telescope...[is] one of the most unusual novels of the year... The effect is pulse-quickening and horrific, as though we've been force marched through a theme park of grotesque monsters."