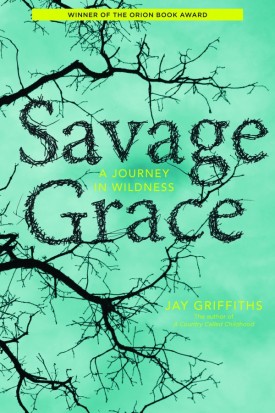 A Journey in Wildness

Jay Griffiths is a tour guide for anyone who has ever wished to commune with the side of our human psyche that remains in touch with the wild. Equally at home among the “sea gypsy” Bajo people who live off the coast of Thailand and forage their food from the ocean floor, drinking the psychedelic ayahuasca plant with Amazonian shamans, or joining an Inuit whale hunt at the northern tip of Canada, Griffiths takes readers on an adventure both charted and un-chartable. She divides her meditations on these travels into sections named after the ancient elemental properties of the universe–Earth, Air, Fire, Ice, and Water–because her subject matter is not merely the places traveled to but the depths of mind and the cultural narratives revealed by place. It is a universal story told of far-flung groups of humans, with vastly different ways of life, connected through the varied wilderness that sustains them. By describing the ways in which human societies and the human mind have developed in response to the wilder elements of our homelands, Savage Grace reveals itself as a benediction for the emotional, intellectual, and physical nourishment that people continue to draw from the natural world. Under the sway of Griffiths’ charisma, her poetic prose, and her deeply learned and persuasive case for the wild roots of our shared human being, we learn that we are all, each and every one of us, a force of nature.

Jay Griffiths is the author of A Sideways Look at Time, Savage Grace, A Country Called Childhood, and A Love Letter from a Stray Moon. She won the Orion Book Award and the Barnes & Noble Discover Award for the best new non-fiction writer to be published in the USA and has been shortlisted for the Orwell Prize.

Praise
"An original and exciting mind: Jay Griffiths' voice is a light beam in the fog of twenty-first century debate." -- Barry Lopez "Savage Grace is like nothing else I've ever read: thrilling, troubling, frightening, exhilarating. Jay Griffiths' courage and energy are formidable, but so is her sheer intelligence and literary flair. This is a truly necessary book, and we are all lucky that the subject found a writer worthy of it." -- Philip Pullman "Savage Grace is an astonishing piece of writing, truly medicinal, beautiful, passionate and raw." Ed O'Brien, Radiohead "Passionate, rigorous and utterly honest, Griffiths' remarkable book is written in a style as wild and exciting as its subject." --Robert Macfarlane, author of Mountains of the Mind. "A major book by a woman who is, no question, a major writer--powerful and uncompromising--she writes like four kinds of gorgeous, so deep in love with the world that when the right word isn't there, she simply births it--a majestic anthropology." --Bill McKibben in The Ecologist "An utter wonder of a book, vulnerable, ferocious and elegiac, a polyphonic fugue written in a style that for once matches the intensity of its topic. Luminously awake, politically astute, without a doubt Wild is the expression of a uniquely capacious intelligence, the song of a heart pulsing with compassion for divergent places and creatures as they weather the insanity of contemporary civilization. Yet it's written with abundant empathy for the human animal, too, in its instinctive eloquence and its institutional stupidities. Meanwhile, her keen attunement to the music of language and to the rootedness of words in the more-than-human soundscape enlivens this work with a magic that provokes the involvement of all one's senses. It's a deliciously erotic read. --David Abram, author of The Spell of the Sensuous "I used to think the wild did not have words, that it lay beyond the edge of logic and expression. With her journey and her struggle, Jay Griffiths proves me wrong. She wanders, she wonders, she suffers, she survives. Her words are intense, episodic, gripping, and sensual, somewhere between Edward Abbey and Jeanette Winterson--who knew there was such a place? Savage Grace is the first great nature writing of the 21st century." --David Rothenberg, author of Why Birds Sing and Wild Ideas "Jay Griffiths' works are original, inspiring and dare you to search beyond the accepted norm." Nikolai Fraiture from The Strokes "Jay Griffiths is a five-star, card-carrying member of the hellfire club--a strange, utterly compelling book." The Guardian "Jay Griffiths's Savage Grace is part travelogue, part call to arms and wholly original--it is probably poetry that comes closest to defining this undefinable and untameable work. A vital, unique and uncategorisable celebration of the spirit of life wherever it is found, Savage Grace is a profound and extraordinary piece of work. The Observer "It's as though, arm in arm, James Joyce and Dylan Thomas went out to find the deep meaning of wilderness." --Bruce Elder, Sydney Morning Herald "One of the greatest and most radical travel books of the past 20 years." The Age "Incandescent, kaleidoscopic, exhilarating, Savage Grace is sensuous, cocky, magnificent, liberating, explosive and exciting Joycean word-play, meticulous scholarship, ironic wit, crafted cadences, Savage Grace is a profoundly important contribution, a raging oratorio. Richard Mabey, The Times "Insightful, effervescent and lavishly written." Ruth Padel, The Washington Post "There is no getting away from the book's brilliance--a raucous, unsettling, life-enhancing work." --Anthony Sattin, The Sunday Times "Savage Grace is a song of delight, and a cry of warning, poetic, erudite and insistent...a restless, unstintingly generous performance, it carries the mark of true intellectual and spiritual passion." --Jonathan Gibbs, The Independent on Sunday "Remarkable, impassioned meditation and world-roving travelogue...exhilarating, high-risk stuff, thrumming with unbridled erotic charge...learned and poetically pagan geographical and emotional journey of extraordinary range, linguistic brio, nobody can fail to be enriched by this book's wealth of observation and description...a memorable appeal to live for the now, and in the fullness of the senses." --Jeremy Seal, Sunday Telegraph "Dazzling gift and fascination for language ... this is a hungry, brave, all-consuming book, jumping with life, littered with perceptions and understandings, written by a woman who has engaged deeply with her subject and addressed it with warmth and vigour." Adam Nicolson, The Spectator "Remarkable. She tears out a stupendous style, volcanic yet soft like the sound of a river, cadenced as birdsong, in a book almost onomatopoeic in the use of language to match its view of the world. It is the intellectual immersion that really distinguishes her book. Her use of etymology to reach into the core of a cultural vision is unsurpassed--a book constructed through intuitive, poetic associations. She takes on the Western conceptual lexicon, exposing the misapprehensions on which it is based. The true wildness at the heart of the book is the author's own. There is a restlessness and a pain beneath every sentence which can fill one with a deep melancholy. But there is also a righteous fury, at the destruction of a world whose every fibre is, for this deeply sensitive writer, precious almost beyond understanding. The result is a paean, a threnody, a work of great sadness and great joy." Toby Green, The Independent "Jay Griffiths brings fierce conviction and impressive scholarship to her work...great erudition and a real sensitivity to language." Publishers Weekly "Like Henry David Thoreau, Jay Griffiths wants to live deep and suck out all the marrow of life...an immersionist, [her] research is impressive, [her] writing dexterous and lush...a passionate plea for the preservation of wilderness. --The New York Times "The Charlie Parker of the English language" - Paul Winter on Jay Griffiths