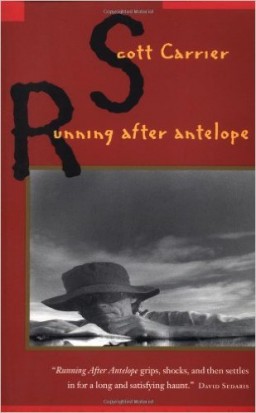 The wildly various stories in Running After Antelope are connected and illuminated by a singular passion: the author’s attempt to run down a pronghorn antelope. His pursuit-odd, funny, and inspired-is juxtaposed with stories about sibling rivalry, falling in love, and working as a journalist in war-torn countries. Scott Carrier provides a most unique record of a most unique life.

Scott Carrier is a writer, photographer, and radio producer. He was born, raised and still lives in Salt Lake City, Utah, and he teaches journalism at Utah Valley University in Orem, Utah. His print articles and photos have appeared in Harper's, Esquire, GQ, Rolling Stone and Mother Jones. His radio stories have been broadcast by NPR All Things Considered, NPR Day to Day, APM The Story, Savvy Traveler, Hearing Voices from NPR, and PRI This American Life.