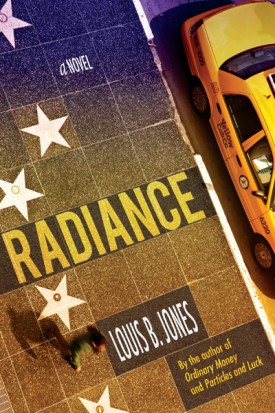 By Louis B. Jones

Mark Perdue has so many problems that when he starts feeling chest pains on the tarmac at LAX, it dawns on him that a heart attack might be an efficient way out. Once an eminent physicist, he hasn’t published or had a new idea in a decade. The younger professors at UC Berkeley pity him, and he’s taken to using the back staircases to avoid their looks. At home, his wife has been inconsolable since the recent late–term abortion of their afflicted fetus. And he can’t deny it any longer—he is decidedly losing his mental faculties to chronic Lyme disease.

Now Mark is visiting Los Angeles with his ambitious daughter, Carlotta, so she can attend a “Celebrity Fantasy Vacation,” in which she is promised three days and two nights of the rock star lifestyle. On stage, Carlotta sings her way to a new self–confidence, giving Mark a glimmer of joy in her sense of victory. But then she disappears with her newly acquired paraplegic boyfriend to take an excursion to the Hollywood sign and gets them all arrested, Mark included. Mark now faces a night in jail—and maybe a hint of what he really needs to be happy.

About Louis B Jones

Louis B. Jones is the author of the critically acclaimed novels Ordinary Man, Particles, and Luck, and most recently, Radiance. He lives in Nevada City, California.

Praise for California's Over

"With all due respect to Allen Ginsberg, California's Over is substantial proof that Louis B. Jones is one of the best minds of our generation." —Amy Tan

"In Louis B. Jones, as in no other writer working today, a sense of moral outrage, that rare thing, is yoked, oddly and with extraordinary power, to a thrilling gift for lyrical prose." —Michael Chabon

"The people are so human and written with so original a cunning that they are virtually worlds in themselves." —Richard Eder

"Louis B. Jones is a skillful satirist, who sees all, knows all, but who is never cruel." —Newsweek

Praise for Particles and Luck

"One experiences the characters with shifting feelings of tenderness and exasperation, hope and despair. Hilarious . . . gracefully written . . . [Jones] has created a quirky but wholly real work in which to examine themes of fate and coincidence in a seemingly effortless manner." —Chicago Tribune

"A lovely and invigorating novel . . . a domestic farce and social satire. Jones writes [an] engaging novelistic equivalent of a unified field theory—in this case, a link between the human heart and the behavior of subatomic particles." —Los Angeles Times

"Jones is the real thing—a writer with something to say and his own way of saying it." —Scott Turow

"What a smart novel Particles and Luck is. How good of Louis B. Jones to remind us what a beautiful land—a terra linda—we live in, and to remind us of the beautiful universe beyond." —The New York Times Book Review

"Smart, funny, uplifting, tender, and merciless, all at once . . . a remarkable achievement for one novel." —Los Angeles Times

"It is not just heartening, but surprising as well, to find so generous and original a first novel. Wise and accomplished and funny, Ordinary Money presents a vision of the interconnectedness of ordinary things." —The Philadelphia Inquirer

"Jones has a jeweler's eye for lyric conjunctions of the ordinary and the grotesque, and he puts it to good use in this moving, funny, and disturbing meditation on the counterfeit and the real in American life." —Robert Hass