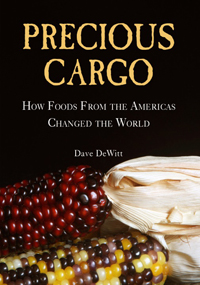 How Foods From the Americas Changed The World

Precious Cargo tells the fascinating story of how western hemisphere foods conquered the globe and saved it from not only mass starvation, but culinary as well. Focusing heavily American foods—specifically the lowly crops that became commodities, plus one gobbling protein source, the turkey—Dewitt describes how these foreign and often suspect temptations were transported around the world, transforming cuisines and the very fabric of life on the planet.

Organized thematically by foodstuff, Precious Cargo delves into the botany, zoology and anthropology connected to new world foods, often uncovering those surprising individuals who were responsible for their spread and influence, including same traders, brutish conquerors, a Scottish millionaire obsessed with a single fruit and a British lord and colonial governor with a passion for peppers, to name a few.

Precious Cargo is a must read for foodies and historians alike.

Dave Dewitt is the author or coauthor of 45 books combined with a 20-year career of editing food magazines. He is a nationally-known proponent of chile peppers and spicy foods and the founding producer of the major trade and consumer show for the industry, the National Fiery Foods & Barbecue Show, now in its 25th year. He lives in New Mexico.

"DeWitt's convivial, unpretentious approach and clear enjoyment of his topic make this assemblage a treasure to dip into again and again." —Weekly Alibi