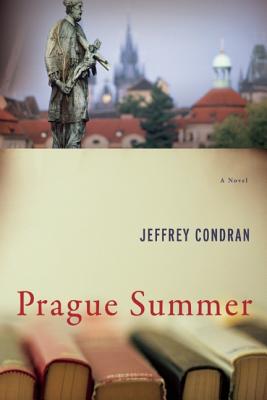 Stefanie and Henry are Americans living in Prague; she works for the State Department, he is a rare books dealer. They live the life of a comfortably married couple—morning coffee at the same café every day, social events with the same small group of friends, a little too much to drink in the evenings and a single episode of Poirot every night before bed. Until one day their world is turned upside down by the arrival from the States of Stefanie’s old friend, Selma Al–Khateeb whose husband has been mysteriously arrested and indefinitely imprisoned. At first it appears that Selma has come to escape her problems, but soon her reasons for coming to Prague grow sinister and murky. Stefanie and Henry’s placid existence is turned upside down in ways they couldn’t have imagined.

Jeffrey Condran is the author of the forthcoming story collection from Press 53, A Fingerprint Repeated. His work has been honored with several awards, including The Missouri Review's 2010 William Peden Prize and Pushcart Prize nominations.

Praise
"Like the city itself, Prague Summer is romantic and mysterious, with a refined literary bent. "One can meet everybody here," our expatriate narrator says, before his quiet life implodes. Jeffrey Condran's debut novel is at once civilized and insidious." — Stewart O'Nan, author of A Prayer for the Dyingand Last Night at the Lobster

"Jeffrey Condran's Prague Summer is both tense and atmospheric, with characters every bit as compelling as the plot. Mysterious on many different levels, it heralds the arrival of an important new novelist. I couldn't put it down, and you won't be able to either." — Steve Yarbrough, author of Safe from the Neighbors

"Jeffrey Condran's debut novel is both highly literary and compulsively readable. Condran – and his characters! – are smart, sharp and witty. On top of all that, there's Prague, haunting, beautiful Prague."—Ellen Sussman, author of the New York Times bestselling novel, French Lessons

"Jeffrey Condran deliberately addresses the tensions and promise of our post–9/11 world with courage, intelligence, and empathy. His characters are often world–weary, but they remain open to the possibilities of love, connection, or even transformative ruin. Condran writes in a voice that radiates self–assurance and knowledge of the hopes and regrets that unite us all." –– Caitlin Horrocks, author of This is Not Your City