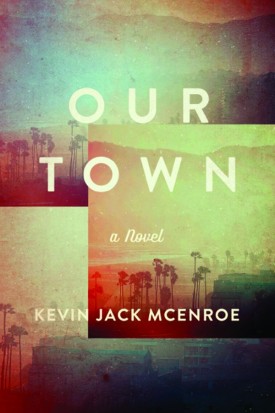 Our Town is the debut of a striking literary voice, one that captures the disillusion at the fringes of Hollywood as seen through a haze of drugs, alcohol, abuse, and fallen aspirations. An unseen narrator guides us through the dark fairy tale of Dorothy White, an aspiring actress who “never quite figured how to get out of her own way.” Her perfect marriage to an equally golden actor, Dale, quickly turns into one of jealousy and violence. Dorothy ends the marriage yet begins a legacy of self–destruction for the failed couple, as well as their two children, Clover and Dylan.

But we see the pathos in Dorothy’s attempts to get back on track, to be a good woman, mother, and grandmother. Throughout the novel, she is left in the wake of decisions that turn disastrous. Her downward spiral from elusive fame into consistent infamy—a series of DUIs, the continuing neglect of her children, a string of failed and unhealthy relationships—is not without its grace, with the warmth of her character shining through her spackled makeup and cloud of acrid perfume. In many ways, Dorothy White is an anti–heroine for the ages—”vanilla voiced,” bewigged, loving, and ever radiant —a sympathetic character caught in the riptide of her transformation from small–town southern girl to one–time toast of Hollywood to embarrassing tabloid fodder.

Our Town is an original and startling debut novel, one whose fresh voice and expert perspective reinvents the Hollywood story for a new generation of readers.

Kevin McEnroe was born in Los Angeles to actress Tatum O'Neal and athlete John McEnroe. He was raised in New York and graduated from Columbia University with an MFA. He currently lives in Brooklyn.

"If Ernest Hemingway had chosen to write about late–20th–century Hollywood while wearing Tennessee Williams' sunglasses, the result might read very much like this. McEnroe, the son of Oscar–winning actress Tatum O'Neal and tennis superstar John McEnroe, brings to his first novel a shrewd, melancholy knowledge of celebrity and its discontents... As detailed as a coroner's report, but with the delicacy of a romantic elegy... McEnroe's writing style is felicitously hard–boiled, by turns tender and sardonic, but never less than compassionate.... The novel often evokes the twilight graces of a classic pop ballad, each lyric evoked with care in a cocktail lounge by a soft, sultry voice etched with pain." —Kirkus, Starred Review

"Our Town is one of those auspicious debuts that cannot be explained because real talent cannot be explained. By turns filled with wonder and knowingness and supported throughout by humor and empathy, McEnroe's characters are real because his insights are real. Like most important fiction, this novel is a metaphorical take on a universal truth or truths, including the fact that without love we lose our ability to laugh."—Hilton Als, author of White Girls

"This novel is an intense and wonderful experience, which makes it all the more impressive that it is McEnroe's first book." —Darryl Pinckney, author of High Cotton

"Kevin McEnroe reimagines Hollywood by way of Revolutionary Road, writing with acute empathy and insider knowledge. Dorothy White is a memorable protagonist, and Our Town is a terrific debut." —Teddy Wayne, author of The Love Song of Jonny Valentine

"Kevin McEnroe, being the son of Tatum O'Neal and John McEnroe, certainly has had plenty of experience with the up and down life of Hollywood, the "our town" of the title. His insightful, ironic, and very well written first novel is filled with the triumphs and tragedies of show business life, an existence forever in the fast lane. His tale rings terribly true and truly terrible, and is brightened with the promise of fine work to come." —Peter Bogdanovich

"From Lou Reed to Joan Didion, the tale of the young and the not–so–young Hollywood starlet has been treated with a gimlet–eyed intelligence. What makes Kevin McEnroe's Our Town so striking is not just his fierce intelligence —although there is certainly that— but his masterful flexibility of tone. Written with both razor–keen irony and surprising, startling depth of sympathy, Our Town is magnificent." —Matthew Specktor, author of American Dream Machine