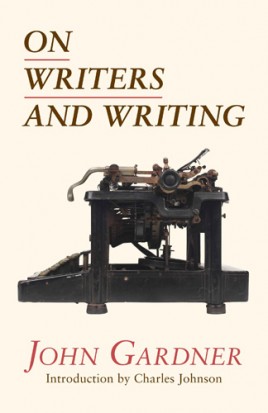 On Writers and Writing

This compilation of essays and reviews, gathered posthumously from the New York Times Book Review and other publications, solidifies John Gardner’s legacy as a consummate teacher and controversial critic with a provocative sense of humor. Writing about his fellow craftsmen, John Gardner offers piercing insights into those whose works he admired and those whose works he didn’t. In exacting unapologetic evaluations upon such writers as Saul Bellow, Vladimir Nabokov, Philip Roth, John Cheever, Larry Woiwode, Joyce Carol Oates, and John Updike, Gardner separates genuine fiction from fakery, careful not to spare his own writings in the process, and in doing so, he displays his influences and wide–reaching observations of the literary life.

Refreshingly unpredictable and self–aware, this collection lays bare the core qualities of lasting fiction and is essential reading for anyone interested in American literature.

John Gardner was a controversial critic, novelist, teacher, translator, music composer, medievalist, and scholar of ancient languages, best-selling author. He wrote several books, including Nickel Mountain, Grendel, The Sunlight Dialogues, and October Light. One who proclaimed himself never to be cautious, he died in a motorcycle accident in 1982.

Praise
"His high critical standards and gimlet insights shine through."