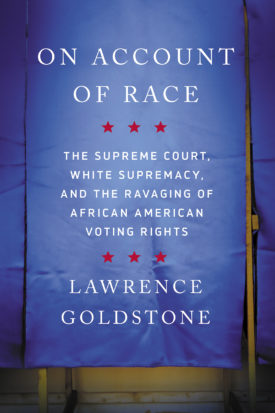 The Supreme Court, White Supremacy, and the Ravaging of African American Voting Rights

Winner of the Lillian Smith Book Award for 2021

An award–winning constitutional law historian examines case–based evidence of the court’s longstanding support for white supremacy (often under the guise of “”states rights””) to reveal how that bias has allowed the court to solidify its position as arguably the most powerful branch of the federal government.

One promise of democracy is the right of every citizen to vote. And yet, from our founding, strong political forces were determined to limit that right. The Supreme Court, Alexander Hamilton wrote, would protect the weak against this very sort of tyranny. Still, as On Account of Race forcefully demonstrates, through the better part of American history the Court has instead been a protector of white rule. And complex threats against the right to vote persist even today.

Beginning in 1876, the Supreme Court systematically dismantled both the equal protection guarantees of the Fourteenth Amendment and what seemed to be the right to vote in the Fifteenth. And so a half million African Americans across the South who had risked their lives and property to be allowed to cast ballots were stricken from voting rolls by white supremacists. This vacuum allowed for the rise of Jim Crow. None of this was done in the shadows—those determined to wrest the vote from black Americans could not have been more boastful in either intent or execution.

On Account of Race tells the story of an American tragedy, the only occasion in United States history in which a group of citizens who had been granted the right to vote then had it stripped away. It is a warning that the right to vote is fragile and must be carefully guarded and actively preserved lest American democracy perish.

Lawrence Goldstone is the author of five books and numerous articles on constitutional law. His reviews and opinion pieces have appeared in, among other publications, The Wall Street Journal, Los Angeles Times, Chicago Tribune, Miami Herald, The New Republic, and Tablet. His wife is the noted medieval and renaissance historian, Nancy Goldstone. Find out more at lawrencegoldstone.com.

Praise
“On Account of Race reveals the ways in which the U.S. Supreme Court has, time and again, upheld white supremacy at the expense of voters of color.” —K. W. Colyard, Bustle

“Lucid legal history . . . Sketches the contours and ramifications of each case skillfully, boldly critiquing the legal reasoning behind the majority opinions. This well–sourced and accessible account makes a convincing case that America’s highest court played a key role in stalling black progress for a century.” —Publishers Weekly

“An expert on constitutional law skewers the U.S. Supreme Court for its failure to strike down practices that disenfranchise black citizens . . . A persuasive case that history matters and that the past is prologue.” —Kirkus Reviews

“A thought–provoking book about some of the tragic twists and turns of race in the Supreme Court post–Civil War. This is a significant conversation.” —Jay Winik, bestselling author of April 1865 and 1944

“In a book both reasonable and readable, Lawrence Goldstone effectively challenges the convenient mythology that racial segregation was a policy reflecting merely the isolated prejudices of the southern American states in the post–Civil War era. His main focus is the U.S. Supreme Court and the peculiar, absurdly twisted logic across a series of critical cases by which the justices undermined the Fourteenth and Fifteenth Amendments, systematically legitimating Jim Crow. The lesson is clear: that voting and other basic rights, unless broadly defended, can rest on fragile foundations indeed.” —Ronald King, professor of political science at San Diego State University and coauthor of Removal of the Property Qualification for Voting in the United States

“No right is more important than the vote. Yet in this engaging and highly readable book, Lawrence Goldstone shows how the Supreme Court, the supposed guardian of our fundamental rights, has repeatedly failed to protect this right for the most vulnerable Americans. With an eye for detail and irony, Goldstone uncovers the dramatic stories behind the cases in which the Court left racial minorities to fend for themselves in a hostile democracy.” —Adam Winkler, professor at UCLA School of Law and National Book Award finalist for We the Corporations

“Skillfully and with measured patience, deep insight, and extraordinary attention to primary source evidence charts the course of the United States Supreme Court’s abandonment of African American Fifteenth Amendment voting rights and Fourteenth Amendment equality under the law civil rights. In a compelling manner, Goldstone lays bare the glaring and in many instances jarring evidence of the brutal physical suppression of African Americans in the post–Civil War South by white “Redeemers,” and the High Court’s serendipitous avoidance of the evidence of sustained discrimination against especially African Americans seeking to use their civil and voting rights. Goldstone’s meticulous research brings forward the numerous cases brought before the Court by African American litigants seeking redress, even as he demonstrates persuasively that African Americans had no ally in the High Court as they and the relatively small numbers of whites who supported them sought to realize the equality promised them by Reconstruction Era amendments to the nation’s Constitution.” —Marsha J. Tyson Darling, PhD, director of African, Black and Caribbean studies at Adelphi University and editor of Race, Voting, Redistricting and the Constitution

“A careful and brilliant analysis of the effort of the Southern states to deprive the African American population of the right to vote after Reconstruction ended in 1877. There was no disguise of their purpose and no restriction on the method they used. From the grandfather clause or poll taxes or literacy tests, whatever could be used to block African Americans from voting was openly and emphatically applied. The white population was simply determined to keep the ballot box for themselves. Goldstone shows how the courts refused to interfere in any way with this program. Even such noteworthy judges as Justice Oliver Wendell Holmes approved the effort. The book carefully examines the campaign, which lasted almost one hundred years until the Voting Rights Act of 1965.” —Leon Friedman, Joseph Kushner Distinguished Professor of Civil Liberties Law at Hofstra University