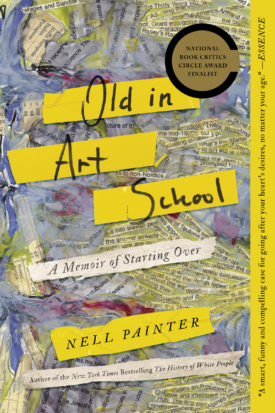 A Memoir of Starting Over

A Finalist for the National Book Critics Circle Award in Autobigraphy

“A smart, funny and compelling case for going after your heart’s desires, no matter your age.” —Essence “Old in Art School is a glorious achievement―bighearted and critical, insightful and entertaining. This book is a cup of courage for everyone who wants to change their lives.” ―Tayari Jones, author of An American Marriage Following her retirement from Princeton University, celebrated historian Dr. Nell Irvin Painter surprised everyone in her life by returning to school–in her sixties–to earn a BFA and MFA in painting. In Old in Art School, she travels from her beloved Newark to the prestigious Rhode Island School of Design; finds meaning in the artists she loves, even as she comes to understand how they may be undervalued; and struggles with the unstable balance between the pursuit of art and the inevitable, sometimes painful demands of a life fully lived. How are women and artists seen and judged by their age, looks, and race? What does it mean when someone says, “You will never be an artist”? Who defines what “An Artist” is and all that goes with such an identity, and how are these ideas tied to our shared conceptions of beauty, value, and difference? Old in Art School is Nell Painter’s ongoing exploration of those crucial questions. Bringing to bear incisive insights from two careers, Painter weaves a frank, funny, and often surprising tale of her move from academia to art.
About Nell Painter

NELL IRVIN PAINTER is the Edwards Professor of American History, Emerita, at Princeton University. Her acclaimed works of history include Standing at Armageddon, Sojourner Truth, and the New York Times bestseller The History of White People. She holds an MFA from the Rhode Island School of Design and a BFA from Mason Gross School of the Arts.