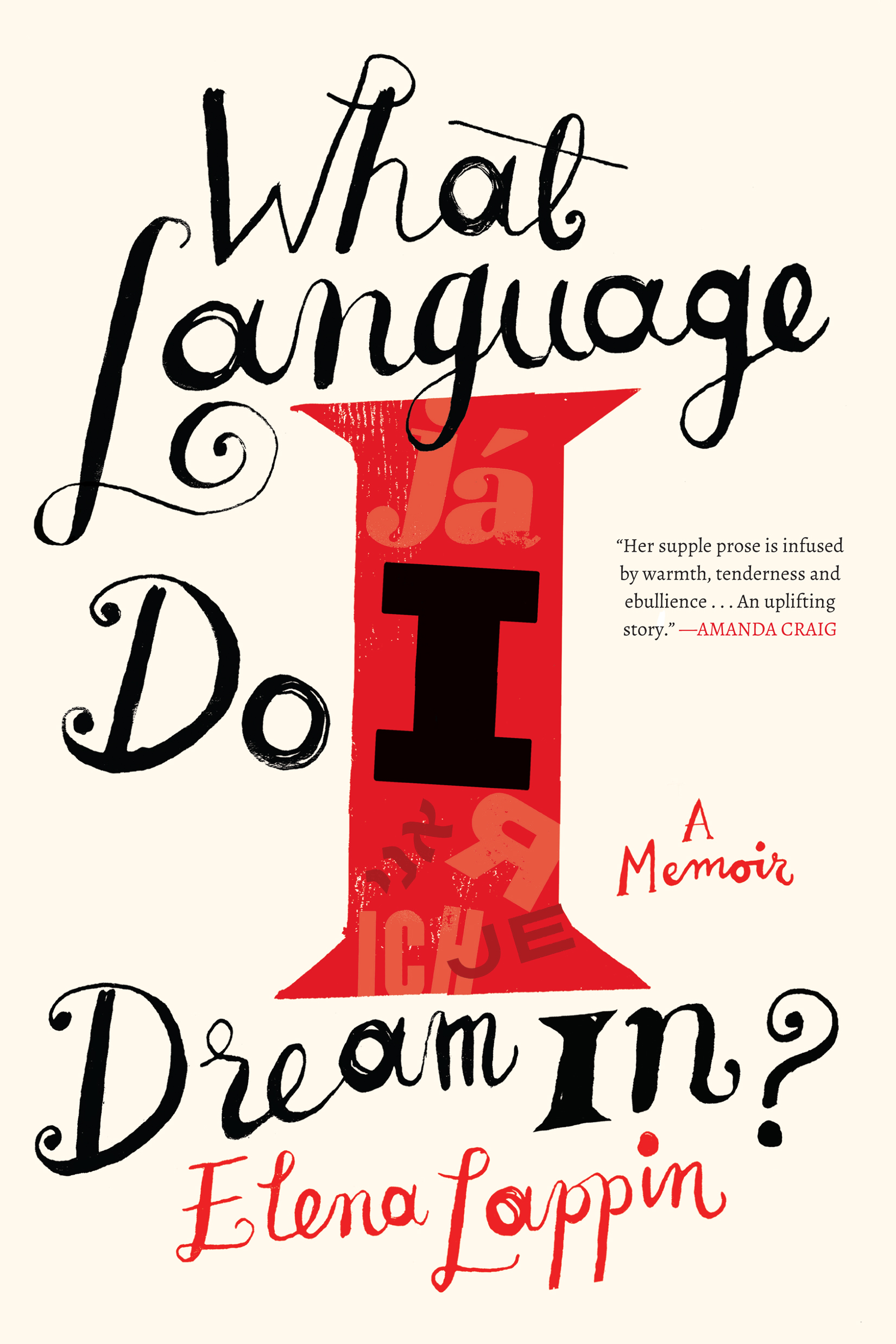 What Language Do I Dream In?

Taking its title from a question often asked of polyglots, What Language Do I Dream In? is Elena Lappin’s stunning memoir about how language runs throughout memory and family history to form identity. Lappin’s life could be described as “five languages in search of an author”, and as a multiple émigré, her decision to write in English was the result of many wanderings. Russian, Czech, German, Hebrew, and finally, English: each language is a link to a different piece of Lappin’s rich family mosaic and the struggle to find a voice in a language not one’s own.

From Europe to North America—and back again, via some of the twentieth century’s most significant political upheavals—Lappin reconstructs the stories and secrets of her parents and grandparents with the tenderness of a novelist and the eye of a documentary filmmaker. The story of Lappin’s identity is unexpectedly complicated by the discovery, in middle age, that her biological father was an American living in Russia. This revelation makes her question the very bedrock of her knowledge of her birth, and adds a surprising twist: suddenly, English may be more than the accidental “home in exile”—it is a language she may have been close to from the very beginning.

“English is not my mother tongue,” writes Elena Lappin, “it is something more valuable: a language I was lucky enough to be able to choose.” What Language Do I Dream In? is a wonderful, honest story about love, family, memory, and how they intertwine to form who we are.

Elena Lappin is a writer and editor. Born in Moscow, she grew up in Prague and Hamburg, and has lived in Israel, Canada, the United States and — longer than anywhere else — in London. She is the author of Foreign Brides and The Nose, and has contributed to numerous publications, including Granta, Prospect, the Guardian, and The New York Times Book Review.

Praise for What Language Do I Dream In?

“It's refreshing to see a memoir that doesn't make a song and dance about family secrets, but instead uses them as landmarks for locating the author's own personality.” —Times Literary Supplement

“Her supple prose is infused by warmth, tenderness and ebullience . . . An uplifting story.” —Amanda Craig, The Observer

“[Lappin] reflects powerfully on the extent to which her identity has been established by the complicated multiplicity of languages in her life, and on the ways in which each of these languages reflects a powerful political and historical reality.” —The Jewish News of Northern California

“Lappin presents a thoughtful migrant's memoir that will speak to all those of us who find their lives suspended between nations, cultures, languages; between past and present selves; between rival identities and loyalties; to all those who live with a hyphen at the centre of their life stories. Which is to say, to nearly everyone.” —Dan Vyleta, Giller Prize–shortlisted author of The Crooked Maid and the national bestseller Smoke

“This beautiful exploration of what it means to be European in the 21st century has never been more necessary. In characteristically elegant prose, Lappin takes readers on a brave personal journey as she uncovers painful family secrets set against a backdrop of political cruelty and perpetual motion. Her warmth, humanity and above all understanding of the need for communication shimmer throughout, making this a book full of optimism, deeply resonant with today's world of global dislocation.” —Anne Sebba, author of Les Parisiennes

“Elena Lappin can absorb new languages like a sponge absorbing water: a useful gift, since a life begun in Russia soon swept her from country to country, and she could live comfortably in each of them. But in which could she go that one step further, and find her true self as the writer she knew herself to be? This book is her story of her search for that special language. It is a captivating book, so sparkly with vitality, humour and genuine charm that English readers have to love it—and feel lucky. Because the language Lappin finally homed in on is theirs!” —Diana Athill, author of After a Funeral, and Somewhere Towards the End

“This intriguing memoir throws a unique light on the fortunes of a young woman—her travels, her cultural inheritance and, most of all, her languages. Elena Lappin's tale is an archetype of post–war political upheaval, her travels and migrations a reflection of world events. But it is also an extraordinarily personal account of a modern life that is uniquely Jewish...the tree roots of [Lappin's] memory remembered from childhood and captured here in her remarkable memoir.” —Jewish Chronicle

“Lappin’s work is full of warmth, wise, full of comic anecdotes. It’s a history of her family as much as her own memoir, going back multiple generations and projecting forward into the future.” —Cherwell

“Elena Lappin is a marvelous writer. Her riveting memoir describes living in five languages and as many countries. The family relationships and the political upheavals which so often shape them are complex, yet her writing is as readable and warm as a letter from a friend.” —Vesna Goldsworthy, author of Gorsky
Don't miss news & events from Counterpoint Press.
Subscribe to the newsletter today.