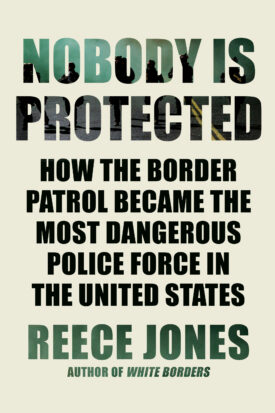 An urgent look at the US Border Patrol from its xenophobic founding to its current role in racist policing and the ongoing assault on the Fourth Amendment.

Late one July night in 2020 in Portland, Oregon, armed men, identified only by the word POLICE stitched onto their uniforms, began snatching people off the street and placing them in unmarked vans. The people targeted were legally protesting as part of a nationwide Black Lives Matter movement.

More arrests soon followed. These actions were not done by a group of right-wing terrorists, or the FBI or CIA. They were common practice maneuvers conducted by the US Border Patrol. The fact that the Border Patrol was operating so far from what we think of as “the border” might seem like a surprising revelation.

The Border Patrol can legally operate anywhere in the United States, but it has additional powers to stop and interrogate people without a warrant in a zone within one hundred miles of land borders and coastlines, an area including nine of the ten largest cities in the United States and two thirds of the population, and an area the American Civil Liberties Union has come to call the Constitution Free Zone, as a result.

Nobody is Protected: How the Border Patrol Became the Most Dangerous Police Force in the United States is the untold story of how the Fourth Amendment of the Constitution has been curtailed in service of the policing of our borders. It shines a light on this often secretive but powerful police force; how its agents are arrested for committing crimes five times more often than regular police officers, how its culture of racism and violence has proliferated over the last few decades, and how its power, oftentimes, goes unchecked.

Borders expert Reece Jones tells the history of the Border Patrol that has defined its culture and authority: mapping its Wild West beginnings, starting with a small cohort one hundred years ago, to its militarized force today, revealing the shocking true stories and characters behind its most dangerous policies. With Border Patrol agents now using their powers to arrest peaceful protestors and demonstrators, the truth behind their influence and history has never been more urgent.

Reece Jones is a Guggenheim Fellow. He is a Professor and the Chair of the Department of Geography and Environment at the University of Hawai'i. He is the author of three books, the award-winning Border Walls, and Violent Borders, as well as the forthcoming White Borders (2021). He is the Editor-in-Chief of the journal Geopolitics and he lives in Honolulu with his family.