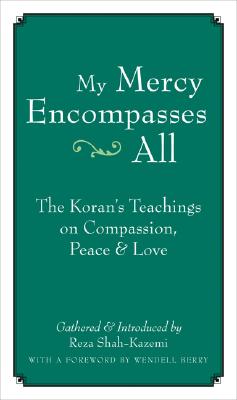 My Mercy Encompasses All

The Koran's Teachings on Compassion, Peace and Love

If the concept of divine unity dominates the mind, it is the principle of divine compassion that rules the heart in Islam. Contrary to the harsh stereotypes of Islam–fostered both by fanatics within the religion itself, and by biased critics–the culture of this religion is steeped in the ambience generated by mercy and compassion, expressions of divine love. This spiritual culture issues from heartfelt conviction that God is to be taken absolutely seriously when he declares in the seventh chapter of the Koran, “My mercy encompasses all.”

Drawn from his own translations of the text, scholar and author Reza Shah–Kazemi has selected key verses from the Koran which manifest the various facets of this mercy, a mercy which bestows profound peace and infinite love. In the spirit of Blessed Are the Peacemakers, Wendell Berry’s collection of quotations from the Bible, here is a book to help us illuminate an immensely influential text

Reza Shah-Kazemi was born in 1960 in London. He was educated at Sussex University, Exeter University, and Kent University. He spent a year in Paris studying French and is fluent in Persian. In 1994 Reza co-launched the journal Islanmic World Report, which is now a publishing company. From 1997-1999 he served as a consultant to the Institute for Policy Research (IKD)in Kuala Lampur, Malaysia, a political-cultural think-tank, and general editor of IKD Monograph Series. He has authored and translated a number of works, edited a number of collective volumes, and published over a dozen articles and reviews in academic journals. Shah-Kazemi is currently a Research Associate at the Institute of Ismaili Sutdies, London, trustee of the Matheson Trust, and contributor to the BBC World Service program, Pause for Thought.

Wendell Berry is the author of fifty books of poetry, fiction, and essays. He was recently awarded the Cleanth Brooks Medal for Lifetime Achievement by the Fellowship of Southern Writers and the Louis Bromfield Society Award. For over forty years he has lived and farmed with his wife, Tanya, in Kentucky.