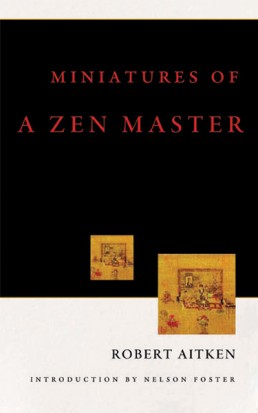 Miniatures of a Zen Master

For more than four decades, Robert Aitken Roshi has taught thousands of people the Buddhist practice of Zen meditation, and has led hundreds through their practice of the study of traditional koans. He has authored more than a dozen books, including a celebrated appreciation of Basho’s haiku; volumes of commentary on sacred texts; works on ethics, daily life, and social action; and one of the best–loved introductions to Zen Buddhism, Taking the Path of Zen. After a long and remarkable life—he will be 91 years old when this collection is published—Aitken Roshi offers a collection of 266 short texts. Some are clearly parables; others are simple stories, quotations, memories, and commentaries. Resembling Benjamin Franklin’s Almanac or the epigrams of Chamfort as much as it does work from ancient sages, this collection of “miniatures” distills a life devoted to teaching and awareness. Any person living a considered life, whether secular humanist or religious seeker, will find this a book of rich inspiration.

Praise
"In this sprightly collection of 188 short texts, [Aitken] offers brief stories, observations, memories, and commentaries. Those familiar with his book Encouraging Words will appreciate the further evidence of this Zen Master's wisdom." —Spirituality & Practice

"Like some of the finest Zen literature, they read like the contents of one's own mind and also like a mirror held up to show the mind's quotidian chatter to be somehow pure." —BuddhaDharma