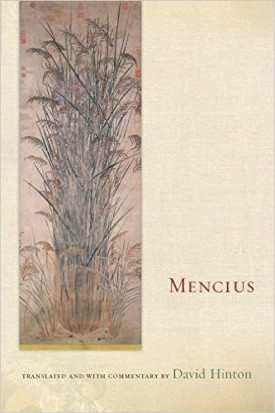 This ancient text records the teachings of Mencius (4th c. B.C.E.), the second originary sage in the Confucian tradition which has shaped Chinese civilization for over two thousand years. In a culture that makes no distinction between those realms we call the heart and the mind, Mencius was the great thinker of the heart, and it was he who added the profound inner dimensions to the Confucian vision. Given his emphasis on the heart, it isn’t surprising that his philosophical method is very literary in nature: story and anecdote full of human drama and poetic turns of thought. Indeed, the text is considered a paragon of literary eloquence and style.

Mencius’ strikingly contemporary empiricism represented a complete secularization of the spiritualist concepts of governance that had dominated China for over a millenia. He invested the humanist Confucian vision with its inner dimensions by recognizing that the individual is an integral part of a self-generating and harmonious cosmos. He saw all the spiritual depths of that cosmology inside us, and this led to a mystical faith in the inherent nobility of human beings. In his chaotic and war-ravaged times, he was therefore passionate in his defense of the people. Indeed, he advocated a virtual democracy in which a government’s legitimacy depended upon the assent of the people. Such is the enduring magic of the Mencian heart– full of compassionate and practical concern for the human condition, and yet so empty that it contains the ten thousand transformations of the entire cosmos.
About David Hinton

David Hinton has been awarded a Guggenheim Fellowship, numerous fellowships from the National Endowment for the Arts and the National Endowment for the Humanities, and both of the major awards given for poetry translation in the United States: the Landon Translation Award, and the PEN Translation Award. His recent book of essays, Hunger Mountain: A Field Guide to Mind and Landscape, was on the Best-Books-of-the-Year list at The Guardian in England.

Praise
"Hinton has established himself as the premier Chinese translator of our generation... He is a national treasure."--The New York Sun