David Hinton has been awarded a Guggenheim Fellowship, numerous fellowships from the National Endowment for the Arts and the National Endowment for the Humanities, and both of the major awards given for poetry translation in the United States: the Landon Translation Award, and the PEN Translation Award. His recent book of essays, Hunger Mountain: A Field Guide to Mind and Landscape, was on the Best–Books–of–the–Year list at The Guardian in England. Hinton lives in Vermont. 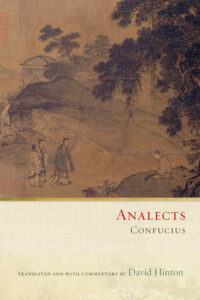 While Confucius failed in his lifetime to rescue a crumbling civilization with his teachings, he was to become the most influential sage in human history. His thought, still remarkably current and even innovative after 2500 years, survives here in The Analects — a collection of brief aphoristic sayings that has had a deeper impact on more people's lives over a longer period of time than any other book in human history.

Formulated in the ruins of a society that had been founded on untenable spiritualistic concepts of governance, Confucius' philosophy postulated a humanistic social order that has survived as China's social ideal ever since. Beginning with the realization that society is a structure of human relationships, Confucius saw that in a healthy society this structure must be a selfless weave of caring relationships. Those caring relationships are a system of "ritual" that people enact in their daily lives, thus infusing the secular with scared dimensions.

Highly regarded for the poetic fluency he brings to his award–winning work, David Hinton is the first twentieth–century translator to render the four central masterworks of ancient Chinese thought: Chuang Tzu, Mencius, The Analects, and Tao te Ching (forthcoming). HIs new versions are not only inviting and immensely readable, but they also apply a much–needed consistency to key terms in these texts, lending structural links and philosophical rigor heretofore unavailable in English. Breathing new life into these originary classics, Hinton's translations will stand as the definitive series for our era. 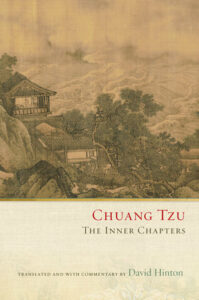 Revered for millennia in the Chinese spiritual tradition, Chuang Tzu stands alongside the Tao Te Ching as a founding classic of Taoism.

The Inner Chapters are the only sustained section of this text widely believed to be the work of Chuang Tzu himself, dating to the fourth century B.C.E. Witty and engaging, spiced with the lyricism of poetry, Chuang Tzu's Taoist insights are timely and eternal, profoundly concerned with spiritual ecology. Indeed, the Tao of Chuang Tzu was a wholesale rejection of a human–centered approach. Zen traces its sources back to these Taoist roots—roots at least as deep as those provided by Buddhism.

But this is an ancient text that yields a surprisingly modern effect. In bold and startling prose, David Hinton's translation captures the "zany texture and philosophical abandon" of the original. The Inner Chapters' fantastical passages — in which even birds and trees teach us what they know — offer up a wild menagerie of characters, freewheeling play with language, and surreal humor. And interwoven with Chuang Tzu's sharp instruction on the Tao are short–short stories that are often rough and ribald, rich with satire and paradox.

On their deepest level, the Inner Chapters are a meditation on the mysteries of knowledge itself. "Chuang Tzu's propositions," the translator's introduction reminds us, "seem to be in constant transformation, for he deploys words and concepts only to free us of words and concepts." Hinton's vital new translation makes this ancient text from the golden age of Chinese philosophy come alive for contemporary readers. 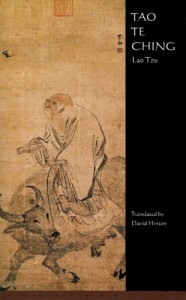 Having masterfully translated a wide range of ancient Chinese poets and philosophers, David Hinton is uniquely qualified to offer the definitive contemporary English version of Lao Tzu's Tao Te Ching. Like all of his translations, Hinton's translation of the Tao Te Ching is mind–opening, presenting startling new dimensions in this widely–influential text. He shows how Lao Tzu's spirituality is structured around the generative life–force, for example, and that this system of thought weaves the human into natural process at the deepest levels of being, thereby revealing the Tao Te Ching as an originary text in deep feminist and ecological thought.

Lao Tzu's Tao Te Ching is not only the single most important text ever composed in China, it is probably the most influential spiritual text in human history. In the past, virtually all translations of this text have been produced either by sinologists having little poetic facility in English, or writers having no ability to read the original Chinese. Hinton's fluency in ancient Chinese and his acclaimed poetic ability provide him the essential qualifications. Together, they allow a breathtaking new translation that reveals how remarkably current and even innovative this text is after 2500 years. 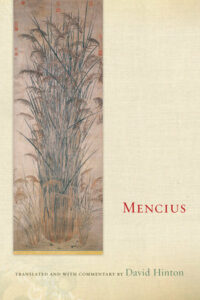 This ancient text records the teachings of Mencius (4th c. B.C.E.), the second originary sage in the Confucian tradition which has shaped Chinese civilization for over two thousand years.

In a culture that makes no distinction between those realms we call the heart and the mind, Mencius was the great thinker of the heart, and it was he who added the profound inner dimensions to the Confucian vision. Given his emphasis on the heart, it isn't surprising that his philosophical method is very literary in nature: story and anecdote full of human drama and poetic turns of thought. Indeed, the text is considered a paragon of literary eloquence and style.

Mencius' strikingly contemporary empiricism represented a complete secularization of the spiritualist concepts of governance that had dominated China for over a millenia. He invested the humanist Confucian vision with its inner dimensions by recognizing that the individual is an integral part of a self–generating and harmonious cosmos. He saw all the spiritual depths of that cosmology inside us, and this led to a mystical faith in the inherent nobility of human beings. In his chaotic and war–ravaged times, he was therefore passionate in his defense of the people. Indeed, he advocated a virtual democracy in which a government's legitimacy depended upon the assent of the people. Such is the enduring magic of the Mencian heart— full of compassionate and practical concern for the human condition, and yet so empty that it contains the ten thousand transformations of the entire cosmos.