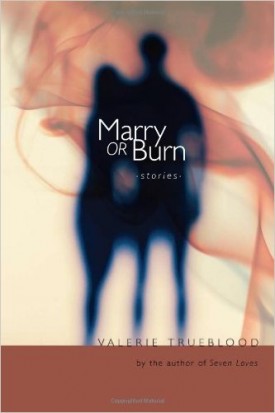 From the author of Seven Loves comes this austere, passionately shaped collection of stories that courageously explores the dynamic nature of modern marriage, the life–shattering heartbreak that often accompanies its collapse, and the fickle way in which the boundaries between us can be broken, erased, and newly defined.

At her daughter’s wedding, an alcoholic widow finds a new beginning when she is swept off her feet by the bride’s former secret lover. A man finds himself in a position of terrible power when he discovers his ex–wife’s boyfriend with another woman. A woman who killed her policeman husband in a rage struggles to reconcile feelings of emotional worthlessness and a longing for human affection after two decades in prison. A widower of twenty–three years introduces his wary daughters to his new love, a woman whom he has decided to marry one week after meeting, and who once took an axe to a bear to save her husband.

Trueblood unites past and present through her characters’ complex personalities as she skillfully unravels their tumultuous relationships, giving readers a glimpse into marital circumstances that, though often tragic, will surely ring familiar.

VALERIE TRUEBLOOD is the author of the novel Seven Loves, and the short story collections Search Party, Marry or Burn, and Criminals. She's been a finalist for the 2014 PEN/Faulkner Award, a finalist for the Frank O'Connor International Short Story Award, and a recipient of the B&N Discover Award. She lives in Seattle.

Praise
Praise for Marry or Burn

"Marry or Burn is a large–hearted, utterly human collection of life–experienced narratives so full that it is difficult to read more than one consecutively." —Irish Times

"Marry or Burn resolutely probes the idea and range of marriage, letting us gaze at a variety of couplings from differing angles, forming a dangerous, sharp–edged mosaic." —The Seattle Times