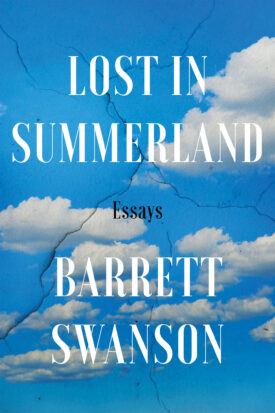 Barrett Swanson embarks on a personal quest across the United States to uncover what it means to be an American amid the swirl of our post-truth climate in this collection of critically acclaimed essays and reportage.

A trip with his brother to a New York psychic community becomes a rollicking tour through the world of American spiritualism. At a wilderness retreat in Ohio, men seek a cure for toxic masculinity, while in the hinterlands of Wisconsin, anti-war veterans turn to farming when they cannot sustain the heroic myth of service. And when his best friend’s body washes up on the shores of the Mississippi River, he falls into the gullet of true crime discussion boards, exploring the stamina of conspiracy theories along the cankered byways of the Midwest.

Traversing the country, Barrett Swanson introduces us to a new reality. At a moment when grand unifying narratives have splintered into competing storylines, these critically acclaimed essays document the many routes by which people are struggling to find stability in the aftermath of our country’s political and economic collapse, sometimes at dire and disillusioning costs.

Barrett Swanson's essays have appeared in Harper's, The New Yorker, The Paris Review, The Believer, The New York Times Magazine, and The Atavist, among other publications. He is the recipient of a Pushcart Prize and has been anthologized two editions of The Best American Travel Writing. He was the Halls Emerging Artist Fellow at the Wisconsin Institute for Creative Writing, and he and his wife live in Madison, Wisconsin.

Praise
“As the narrative of American exceptionalism collapses swiftly and spectacularly all around us, I'm grateful for Barrett Swanson's brilliance and clarity, his affectionate skepticism of our most violent games and lies, his earnest and anxious interrogations of twenty-first-century masculinity. Lost in Summerland is an essay collection of the very highest order: a book that poses more questions than it seeks to answer, a book that has wrestled my empathy for the fucked-up citizens of our tragicomic era and country into new, uncomfortable, gorgeously fruitful places.” —Lauren Groff, author of Florida