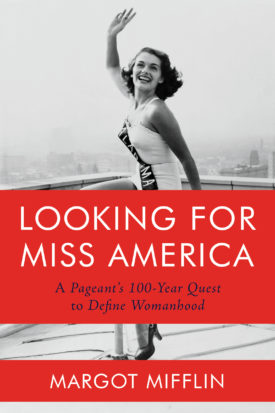 From an author praised for writing “delicious social history” (Dwight Garner, The New York Times) comes a lively account of memorable Miss America contestants, protests, and scandals—and how the pageant, nearing its one hundredth anniversary, serves as an unintended indicator of feminist progress

Looking for Miss America is a fast–paced narrative history of a curious and contradictory institution. From its start in 1921 as an Atlantic City tourist draw to its current incarnation as a scholarship competition, the pageant has indexed women’s status during periods of social change—the post–suffrage 1920s, the Eisenhower 1950s, the #MeToo era. This ever–changing institution has been shaped by war, evangelism, the rise of television and reality TV, and, significantly, by contestants who confounded expectations.

Spotlighting individuals, from Yolande Betbeze, whose refusal to pose in swimsuits led an angry sponsor to launch the rival Miss USA contest, to the first black winner, Vanessa Williams, who received death threats and was protected by sharpshooters in her hometown parade, Margot Mifflin shows how women made hard bargains even as they used the pageant for economic advancement. The pageant’s history includes, crucially, those it excluded; the notorious Rule Seven, which required contestants to be “of the white race,” was retired in the 1950s, but no women of color were crowned until the 1980s.

In rigorously researched, vibrant chapters that unpack each decade of the pageant, Looking for Miss America examines the heady blend of capitalism, patriotism, class anxiety, and cultural mythology that has fueled this American ritual.

Margot Mifflin is the author of Looking for Miss America, Bodies of Subversion: A Secret History of Women and Tattoo, and The Blue Tattoo: The Life of Olive Oatman. She has written for publications including The New York Times and The New Yorker. Find out more at margotmifflin.com.

Praise
“Mifflin is no Miss America apologist. She’s cleareyed about the pageant’s many hypocrisies and failures . . . But Mifflin, too, is invested in the pageant’s sense of specialness; she’s mining Miss America for meaning . . . The pageant’s tensions and ambiguities emerge most vividly through the way particular women understood them in the context of their particular time . . . Lively.” —Molly Fischer, The New York Times Book Review

“Mifflin is as alive to the pageant’s historical grotesqueries as she is to the weirdo details of its founding.” —Lauren Collins, The New Yorker

“Nothing short of fascinating.” —Laura Hanrahan, Cosmopolitan, A Best Nonfiction Book of the Year

“A fascinating look at how Miss America has struggled to stay relevant in the 21st century, without condescension or ridicule toward the women who have fought tooth and nail to be crowned.” —Sarah Stiefvater, PureWow, A Best Nonfiction Book of the Year

“A comprehensive history of how a beauty contest moonlighting as a scholarship program evolved over a century . . . Looking for Miss America is an exploration into the pageant's past, but the contest's days might be numbered.” —Shannon Carlin, Bust

“In this well–written and thoroughly researched book, Mifflin explores how the evolution of the Miss America pageant has echoed ongoing women's rights movements and examines the overall impact of a beauty–based scholarship competition.”—Bitch

“Historian Margot Mifflin encourages us to view Miss America as more complicated than just sashes, hairspray and high heels . . . Even if you’ve never watched a single Miss America pageant on TV, anyone with an interest in American history would benefit from this deep dive into a complex cultural figurehead.”—Jessica Wakeman, BookPage (starred review)

“Lively and probing . . . Whether fans or foes of Miss America, few readers will see the pageant in the same way after finishing this book. A cleareyed look at an iconic beauty pageant and its efforts to stave off irrelevance.” —Kirkus Reviews

“Smart and witty narrative . . . Mifflin reveals how the contest wormed its way into the national subconscious, taking us through its disasters, hypocrisies and ambitions over the last century.” —The National Book Review

“Though she explores the serious failings of the contest, Mifflin also relishes the nostalgia and camp associated with Miss America, making this social history a perfect summer read.” —Booklist

“Beauty pageants have long been a topic of research and wide interest, and Mifflin’s (Bodies of Subversion) work offers excellent content and historical analysis to this ongoing discussion . . . While deftly commenting on the racism and sexism that have characterized the pageant’s history, she also makes space for the contestants to speak openly for themselves about their own experiences, something pageants themselves are not known for. This work offers a thought–provoking, balanced, and highly informative look at an institution that has perplexed and enticed Americans since its founding.” —Library Journal