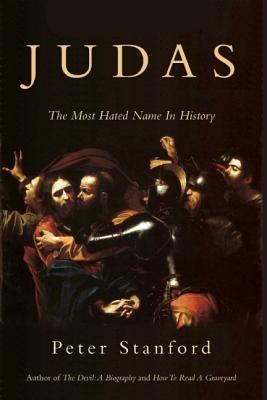 The Most Hated Name in History

In this fascinating historical and cultural biography, Peter Stanford deconstructs that most vilified of Bible characters: Judas Iscariot, who famously betrayed Jesus with a kiss. Beginning with the gospel accounts, Stanford explores two thousand years of cultural and theological history to investigate how the very name Judas came to be synonymous with betrayal and, ultimately, human evil. But as Stanford points out, there has long been a counter–current of thought that suggests that Judas might in fact have been victim of a terrible injustice: central to Jesus’ mission was his death and resurrection, and for there to have been a death, there had to be a betrayal. This thankless role fell to Judas; should we in fact be grateful to him for his role in the divine drama of salvation? “You’ll have to decide,” as Bob Dylan sang in the sixties, “Whether Judas Iscariot had God on his side.” An essential but doomed character in the Passion narrative, and thus the entire story of Christianity, Judas and the betrayal he symbolizes continue to play out in much larger cultural histories, speaking to our deepest fears about friendship, betrayal, and the problem of evil.

Peter Stanford is a senior features writer at the Daily Telegraph and Sunday Telegraph, and contributes to the Independent, the Observer, the Daily Mail, and the Catholic weekly The Tablet, where he is a columnist. He is the author of The Legend of Pope Joan and Teach Yourself Catholicism and he is a regular host on the BBC World Service.

"A straightforward biography that thankfully avoids preaching. Readers curious about Judas' broad effect on world history will welcome this book."—Kirkus

"Light–hearted in tone, anecdotal in style, Peter Stanford's narrative introduces the reader to profound themes. How does the human imagination depict evil, despair and repentance? He takes us through some of the darkest moments of human history, including the Holocaust, revealing our chronic addiction to creating scapegoats to carry the weight of our own failure and betrayal.. From a very early point in Christian history, Christians celebrated the "happy fault" of Adam, because it led to redemption. Stanford asks us to consider if this should also be said of Judas."— Karen Armstrong, author of The Case for God

"A cracking piece of writing that posits such a great idea – a pilgrimage to Judas." –– Frank Cottrell Boyce

"There is no better navigator through the space in which art, culture and spirituality meet than Peter Stanford. His biography of the Devil is a masterpiece. This is an easier book, written in a friendlier style, but the research is just as through.' 'Despite the layers of confusion between the present day and what happened – or not – 2,000 years ago, he finds meaning, and spins a good yarn. (There is also an A to Z of Judas–related bits and pieces, from asparagus to the Zodiac, which is fun).' 'Stanford is more than willing to admit that some or all of this – including the character of Judas himself – may be fiction, as he picks apart the gospels beautifully and uncovers what appears to be home truths.' 'This entertaining, enlightening biography serves the sympathetic old devil wonderfully well.' –– Cole Morton, The Independent on Sunday

"Peter Stanford's engrossing book shows that Judas is a man for all seasons, nearly all of them bad for him and those around him. Judas is a chameleon, though a chameleon in consistently dark colours, endlessly fertile as a symbolic figure, because he helps us to reflect on our own dark side. Stanford, a journalist and broadcaster, says a lot about the many faces and other attributes of Judas and does so very engagingly: his book manages to be fun as well as sometimes profound, and it is as much an enjoyable tour of Christian art and thought as an account of a 2,000–year–old traitor. –– Diarmaid MacCulloch, The Times

"The biggest question has always been whether Judas was an "out–and–out traitor or cog–in–the–wheel of a divine plan", as Stanford puts it. With Judas, as with other religious figures, you can and must believe just what you choose. One of the best moments in the book is when Stanford sees a sign outside the Basilica of the Agony in Jerusalem that reads, "Please: no explanations in the Church." –– Christopher Hart, The Sunday Times

"This is scary and thought–provoking stuff. Curiously, thoughtfully and reassuringly English." –– James Runcie, The Independent

"Wide–ranging and engaging ... Stanford, a much–respected commentator on Catholic affairs, has unearthed some fascinating material and left his readers with more than enough material to prompt some echo of the question "Is it I?"" –– Rowan Williams, New Statesman

"Stanford's book is ultimately a cultural history of the forces which subsumed Judas, leading unstoppably to the version of him – so close to 'Jew' or 'Yehuda' – that lent weight to the idea that the Jews were the murderers of Christ... this book provides, among many insights, a timely account of the origins of anti–Semitism." –– Justin Cartwright, The Spectator

"Judas continues to play an important part in Christian history, the symbol of the bad guy or more specifically the traitor, and especially in the history of anti–Semitism. 'In a brilliant piece of writing, the whole enduring story is summed up in the Appendix, the tale of the author's visit to Laurence Whistler's engraved Judas window in Dorset, entitled "the Forgiveness Window".' –– Henry Wansbrough, TLS

"The tortuous journey of the arch–traitor through cultural history is something of a revelation' A "clever and nimble book" "Stanford's book is engaging without being decisive on Judas and his fate (no matter, the Church has the same problem). In his pilgrimage in search of Judas, some of the finest material in this work is in the form of travelogue: the various sites which have become associated with Judas in the Holy Land, few of which appear in standard tours of Bethlehem, Nazareth, Gethsemane and Calvary." 'No Christian, I think, can have avoided wrestling with the nature of Judas. Stanford's book makes this evident, while charting a dangerous history of co–opting the figure for some of humanity's most shameful episodes. When one thinks of the horrors perpetrated by seemingly decent men and women, the scapegoat Iscariot seems more deserving of pity than terror." —Scotland on Sunday

"Stanford is particularly good at explaining how interpretations evolved during Christianity's early years as the new religion sought to differentiate itself from other sects. Stanford avoids trying to write an all–encompassing study of treachery. He sticks to his subject... he does not balk at explaining theological concepts, yet his manner is always engaging. All in all, his quest for Judas provides a satisfying left–field approach to the entire history of Christianity." –– Andrew Lycett, The Sunday Telegraph

"But a new book from Peter Stanford asks Christians and non–believers alike to look anew at Judas. It chronicles the hatreds, often anti–Semitic in nature, that were cultivated around Judas and contrasts the subsequent mythology with the historical and Biblical record. When it was uncomfortable for Christians to think of their God going willingly, even meekly, to death, Judas made a convenient scapegoat. While Stanford finds much fault in Christendom, he settles on the cornerstone of the faith: Forgiveness. Stanford writes: 'In Matthew, straight after the Judas kiss, Jesus tells his betrayer: 'My friend, do what you are here for' (26:50). And in John's account of the Last Supper, once Jesus has identified Judas as the one who will betray him, he tells him: 'What you are going to do, do quickly'(13:28). Contrary to two millennia of remorseless official vilification and scapegoating, these two brief remarks surely indicate that Jesus knew all too well that Judas was playing his anointed role in God's plan. It was not a task to win him fans, or a halo, but equally is hardly sufficient to tar him ever after as 'the most hated name in human history'." —Fox News

"A delightful Odyssey which attempts to unravel mystery of the enigmatic Judas Iscariot The National, Scotland 'Peter Stanford...holds our attention with the skill of an experienced writer.' Eastern Daily Press Very thought–provoking and well–informed," –– Peter Costello, The Irish Catholic

"'magnificent...this book does several things at once: it's a study in biography, intellectual history and iconography; a personal pilgrimage to the places where the tragedy of Judas took place; and a meditation on his meaning for our time. It does all these things with a generosity of spirit that lends nobility to what could otherwise be a tale of unremitting woe." —Daniel Johnson in Standpoint

"fascinating from start to finish...a richly detailed portrait [that] neatly debunks the idea of Judas Iscariot as the most evil man who ever lived." Alexander Larman, The Observer

"...it is a delight to follow Stanford on his unique journey – a fascinating cultural and historical biography." —Nick Major in The National

"...a fascinating story of febrile myth–making over two millennia…The persistent idea that Jews are the cause of much that is toxic in this world is so absurd, so irrational that this book provides, among many insights, a timely account of the origins of anti–Semitism." —Justin Cartwright in The Spectator

"In this highly readable biography, Stanford traces the progress of Judas through Western literature and art and personally visits the most significant sites associated with him. What we end up with is an entertaining travelogue to accompany a comprehensive history." —Nigel Nelson in Tribune

"...a clever and nimble book – some of the finest material in this work is in the form of travelogue." —Stuart Kelly in Scotland on Sunday

"God needed Judas to betray Jesus in order to carry out his divine plan. The author unravels this knotty theological problem with aplomb, bringing Judas into the secular age." — Michael Conaghan: "7 Books You Should Own" in the Belfast Telegraph

"In a brilliant piece of writing, the whole enduring story [of Judas] is summed up in the tale of the author's visit to Laurence Whistler's engraved Judas window in Dorset, entitled the “Forgiveness Window"." — Dom Henry Wansbrough in the Times Literary Supplement

"Stanford, a much–respected commentator on Catholic affairs, has unearthed some fascinating material" —Rowan Williams in the New Statesman

"Stanford is no stranger to the darker corners of theology [which] may make Judas sound heavy–going. It isn't. He has a light touch and a quick eye for absurdity and drama. The book is stuffed with haunting detail." —Piers Plowright: Camden New Journal

"Many have tried to chart Judas's cultural trajectory through the centuries. Few have approached the task with Stanford's skill and nuance." —Jonathan Wright: Catholic Herald