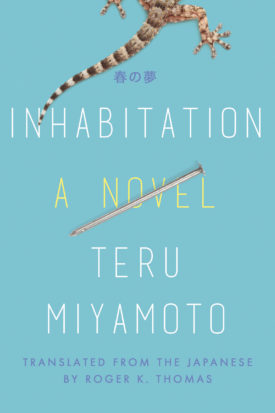 A living lizard nailed to a pillar and a young man bound by a family misfortune—a tale that poses questions about life, death, and karma by one of Japan’s most beloved living writers

In 1970s Osaka, college student Tetsuyuki moves into a shabby apartment to evade his late father’s creditors. But the apartment’s electricity hasn’t been reconnected yet, and Tetsuyuki spends his first night in darkness. Wanting to hang up a tennis cap from his girlfriend, Yōko, he fumbles about in the dark and drives a nail into a pillar. The next day he discovers that he has pierced the body of a lizard, which is still alive. He decides to keep it alive, giving it food and water and naming it Kin.

Inhabitation unfolds from there, following the complications in Tetsuyuki’s relationship with Yōko, a friendship with his supervisor who hides his heart disease at work, and his father’s creditors, always close on his heels. Daunted, Tetsuyuki speaks to Kin night after night, and Kin’s peculiarly tortured situation reflects the mingled pain, love, and guilt that infuses Tetsuyuki’s human relationships.

“Those who read this novel even once will never forget Tetsuyuki’s intensity. I am one of them. Vulnerable, vigorous, the raw sparkle of youth burning with agony. The entire story is crystallized in the image of Kin–chan, who wants to move but can’t. Brilliant is the only word to describe Inhabitation.” —Banana Yoshimoto, author of Moshi Moshi

ROGER K. THOMAS is a professor of East Asian languages and cultures at Illinois State University, where he also directs the program in East Asian Studies. He has translated two of Teru Miyamoto's books, along with other works of modern Japanese fiction, including Enchi Fumiko's A Tale of False Fortunes, winner of the Japan-U.S. Friendship Commission Japanese Literary Translation Prize.

Born in Kobe in 1947, TERU MIYAMOTO is among Japan's most widely read living authors. He has received Japan's most prestigious literary distinctions, including the Osamu Dazai Prize and the Akutagawa Prize. Several of his works have been made into award-winning movies, including Maborosi, directed by Hirokazu Kore-eda.

"Thomas’ translation highlights the deep symbolism and existential dread of Miyamoto’s novel . . . While Tetsuyuki is far from a hero—he’s so passive he couldn’t even be called an antihero—our sympathy for his situation and the evident love he inspires in his mother and Yoko suggests that perhaps for Tetsuyuki—and Kin—not all hope is lost." —Iain Maloney, The Japan Times

"Those who read this novel even once will never forget Tetsuyuki's intensity. I am one of them. Vulnerable, vigorous, the raw sparkle of youth burning with agony. The entire story is crystallized in the image of Kin–chan, who wants to move but can't. Brilliant is the only word to describe Inhabitation." —Banana Yoshimoto, author of Moshi Moshi

“A lizard who stays alive even as its body is pierced through. A young man who tries desperately to love. Inhabitation is a novel in which two lives resonate with each other and light up the root of life and death.” ––Yoko Ogawa, author of Revenge

“What is happiness? Inhabitation is a vibrant coming–of–age story which depicts the anguish, joy, and bafflement of a young man who decides to share a room with a lizard through a strange accident. How such rich and magnificent ideologies are packed into the tiny moments of one’s life!” ––Hiromi Kawakami, author of The Nakano Thrift Shop

"Balancing the familiar and disturbing elements in this narrative requires a sustained sense of balance; that’s exactly what emerges from immersing oneself in this haunting, unsettling novel." —Tobias Carroll, Words Without Borders

"A fascinating exploration of early adulthood in Japan." —Kirkus Reviews

"The coexistence of sadness and joy and the effort to overcome bad karma are the themes of a novel filled with gray skies and ice–covered trees." —Susan Salter Reynolds, The Los Angeles Times

“I love the novels of Teru Miyamoto.” —Hirokazu Kore–eda, winner of the Cannes Film Festival’s Palme d’Or, director of Shoplifters

"In this work, existential crisis after existential crisis force the characters to question whether one can shape one's own karma—rather than construct one's own soul, as a Western reader might have put it. And herein lies the Westerner's entree into the book as more than an observer of Japanese culture. Mr. Miyamoto's delicately woven tale of romance, violated and painfully relinquished, provides a satisfying taste of what it means to grapple with fate at the intersection of modernity and tradition." —Anna Chambers, The Washington Times

“Foes of Banana Yoshimoto will be put off by Miyamoto's similarly winsome insights—‘Perhaps living and dying are the same thing’—while fans will hear echoes in her predecessor's limpid, modest (and smoothly translated) prose.” —i>Publishers Weekly

“Miyamoto provides a close look at the essence of marriage and its importance . . . an elegant and moving novel.” —Mary Whipple, Mostly Fiction