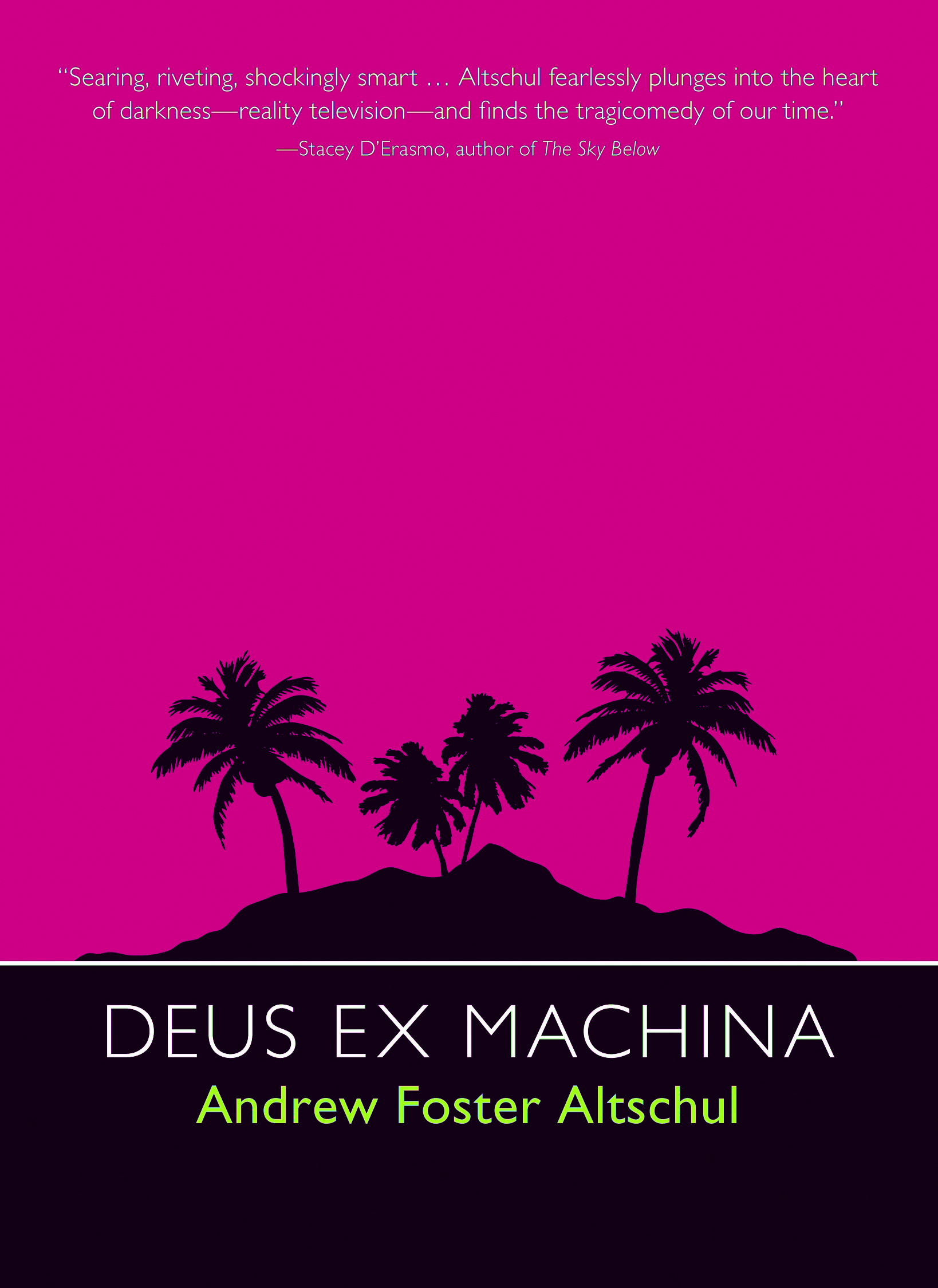 On a distant island, reality show contestants battle for bragging rights and a slot on next week’s episode. They’ve perfected their dramatic roles and are prepared to do whatever it takes to win. There’s the take–no–prisoners Marine sergeant, the gay hairdresser, the ruthless lawyer, the brainy poet. But one player refuses to compete—Gloria Hamm, a sullen dental hygienist, voted least likely to win by the show’s crew.

The higher–ups are desperate for ratings and sensational twists to trump the plots of seasons past. But the producer—haunted by personal tragedies all too real—is losing control of the show and its crew. While he obsesses about Gloria, the crew plots mutiny, a contestant dances with insanity, and disease threatens to halt the show completely. When real catastrophes strike, the producer finds it harder and harder to navigate his surreal landscape, where boundaries of the real, imagined, and orchestrated have blurred beyond recognition.

Deus Ex Machina deconstructs our notions of narrative, revealing how tricky it is for any auteur to disappear from his creation. In an age when people will seemingly do anything to be on television, it asks what is the true nature of “reality,” and what is its cost?

Andrew Foster Altschul is the author of the novel Lady Lazarus and an O. Henry Prize–winning short story writer. A former music journalist and rock DJ, he is the books editor of The Rumpus and director of the Center for Literary Arts at San Jose State University. He lives in San Francisco.

"Altschul takes his readers on a postmodern ride through reality television currently pulsing through American plasma screens." —The Weekender

"[Deus Ex Machina is] a dark fable about the depravities of contemporary life and the grotesque falsifications that undergird our reality–television culture, a familiar critique for fans of the postmodern metafictional tradition . . . Altschul lays out a fine carpet of literary prose that gives evidence of his commitment to craft." —The Believer

"As Andrew Foster Altschul observes in his brilliant new novel Deus Ex Machina, there's not much reality in reality television . . . One of the best novels about American culture in years . . . It's darkly funny in parts, but mostly it's terrifying in its urgency and plausibility, and it's impossible to look at television the same way after you've read it. You're forced to wonder whether reality TV—whether our country itself—could ever become the nightmare it is in Altschul's stunning, sad novel." —NPR

"A beautifully written treatment on the anguish and uncertainty of being." – The Brooklyn Rail

"An irreverently candid peek inside the entertainment industry, Altschul's absurd and hilarious novel questions free will and reality as it roams godlike among 10 reality–show contestants . . . Altschul brilliantly blurs fact and fantasy, entertainment and voyeurism, forming a smartly funny and timely montage that challenges the meaning of celebrity." —Booklist

"Searing, riveting, shockingly smart, and imbued on every page with a wicked sense of humor, Deus Ex Machina dissects the modern moment like nobody's business. Altschul fearlessly plunges into the heart of darkness—reality television—and finds the tragicomedy of our time there. Brave, bold, and moving work." —Stacey D'Erasmo, author of The Sky Below

"In his new novel, Andrew Foster Altschul has taken reality TV and turned it on its head, with characters that are sharp, funny, and ruthless. But if you look closer you'll see another story, about the nature of identity and the layering of selves that speaks volumes on the abstraction of media, and what it means to truly connect with one another." —Hannah Tinti, author of The Good Thief

"Hilarious and wrenching, Deus Ex Machina trashes the absurdities of our media culture with a pleasing brio, while never losing sight of the inhumanity bred in this new domain of unchallenged corporate hegemony, where everything is subordinate to the Show. And it never lets us forget that no one is immune from—and that everyone is accountable for—all of our toxic dreams of power." —Jim Shepard, author of Project X and Like You'd Understand Anyway
Don't miss news & events from Counterpoint Press.
Subscribe to the newsletter today.