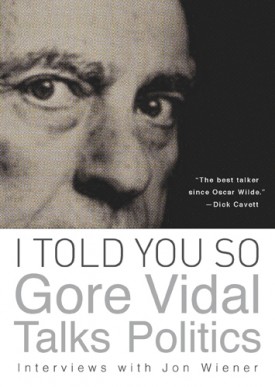 I Told You So

Gore Vidal, one of America’s foremost essayists, screenwriters, and novelists, died July 31, 2012. He was, in addition, a terrific conversationalist. Dick Cavett once described him as “the best talker since Oscar Wilde.” And Vidal was never more eloquent, or caustic, than when let loose on his favorite topic, the history and politics of the United States.

This book is made up from four interviews conducted with his long–time interlocutor, the writer and radio host Jon Wiener, in which Vidal grapples with matters evidently close to his heart: the history of the American Empire, the rise of the National Security State, and his own life in politics, both as a commentator and candidate.

The interviews cover a twenty–year span, from 1988 to 2008, when Vidal was at the height of his powers. His extraordinary facility for developing an argument, tracing connections between past and present, and drawing on an encyclopedic knowledge of America’s place in the world, are all on full display. And, of course, it being Gore Vidal, an ample sprinkling of gloriously acerbic one–liners is also provided.

Gore Vidal (1925-2012) was the author of numerous novels, short stories, plays, screenplays and essays. A winner of the National Book Award, he was also a tireless political activist and, running as Democratic candidate for Congress in upstate New York, received more votes for that district than any Democrat in a half-century.

Jon Wiener is a contributing editor to The Nation and a professor of history at the University of California at Irvine. He is the author of How We Forgot the Cold War: A Historical Journey across America, Gimme Some Truth: The John Lennon FBI Files, and Professors, Politics and Pop, and the editor (with Tom Hayden) of Conspiracy in the Streets.
Praise
Praise for I Told You So: Gore Vidal Talks Politics