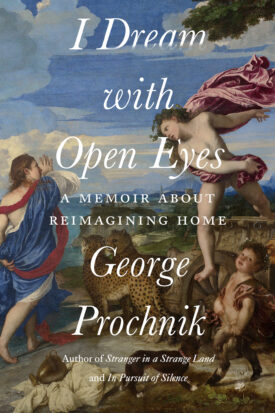 I Dream With Open Eyes

A journey of reckoning and renewal, this story of family history and future dreams is an examination of the individual imagination as a catalyst for social change

Whatever the ideological slant of our information feeds, nowadays we all share a sense of binge-watching the apocalypse. Facing so much uncertainty, we need a language for thinking about the unknown not simply as a threat but also as a space of fertile possibility. George Prochnik has chosen to reflect on these urgent themes through the lens of a personal narrative: an account of his own family’s decision to leave the United States.

I Dream with Open Eyes begins with an exploration of Prochnik’s ancestral past: the pilgrimage of his mother’s family, who were among the first English settlers in the New World. In the aftermath of the 2016 election, a parallel migration unfolds as Prochnik, along with his wife and their son, makes the decision to uproot their lives in New York to move to England.

A deep critique of this current moment, Prochnik takes the words of nineteenth-century poet Heinrich Heine, “I dream with open eyes, and my eyes see,” as an inspiration to ask how, as a society, we might use art and literature to refract and expand our vision of the future, while simultaneously generating a new focus on present realities.

GEORGE PROCHNIK was awarded a Guggenheim Fellowship in general nonfiction in 2021. He is the author of five books of nonfiction including Stranger in a Strange Land, which was a New York Times editors’ choice and was short-listed for the 2018 Wingate Literary Prize in the United Kingdom. His previous book, The Impossible Exile, was shortlisted for the 2016 Wingate Literary Prize and won the National Jewish Book Award for Biography, Autobiography, and Memoir. Prochnik is also the author of In Pursuit of Silence, Putnam Camp, and Heinrich Heine: Writing the Revolution. He has written for The New Yorker, The New York Times, Bookforum, and Los Angeles Review of Books, and is editor at large for Cabinet magazine. Born in Grand Junction, Colorado, Prochnik currently lives in London with his wife and their son.