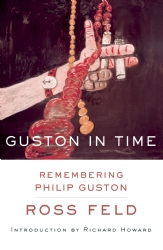 In the years following his controversial 1970 exhibition at the Marlborough Galleries, Philip Guston was generally viewed as yesterday’s scandal, a maverick who had abandoned abstract expressionism and, with it, the adulation of the art world. Few paid serious attention to the disturbing, profound work he was producing in his Woodstock studio. So when Ross Feld, a young novelist and critic, wrote a penetrating review of Guston’s latest show, the artist sent him a letter of appreciation: “I felt . . . as if we knew each other and had many discussions about painting and literature. In a word—I felt recognition.”

Thus began a remarkable friendship. Feld, a frequent visitor to Guston’s studio where the two men would talk late into the night, became Guston’s intellectual sparring partner and sounding board—”I’ll shout it right out,” Guston wrote to Feld, “you inspire me to paint again!”—as well as the artist’s most eloquent critic and champion. Guston in Time is Feld’s final tribute, and it is at once a testament to a friendship, a provocative and richly nuanced study of one of the twentieth century’s most important artists, and a portrait of a remarkable character.

Ross Feld is the author of four novels, a book of criticism, and a collection of poetry. He is the recipient of a Pushcart Prize, as well as fellowships from the National Endowment for the Arts and the MacDowell Colony. He lived for years in Cincinnati, where he died in May 2001.