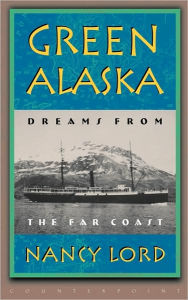 Dreams from the Far Coast (Revised)

In 1899 Edward Harriman, the railroad tycoon and most powerful man in America, assembled an elite crew of scientists and artists and took them on a two month survey of the Alaskan coast. Its 126 members included mountaineer John Muir, nature writer John Burroughs, biologist C. Hart Merriam, naturalist and Alaskan expert William Dall, bird artist Louis Agassiz Fuertes, ornithologist George Bird Grinnell, and photographer Edward Curtis. The expedition returned with 100 trunks of specimens and over 5000 photographs and coloured illustrations. The scientists produced 13 volumes of data that took 12 years to compile.

Nancy Lord lives in Homer, Alaska. From her many years of commercial salmon fishing and, later, work as a naturalist and historian on adventure cruise ships, she's explored in both fiction and nonfiction the myths and realities of life in the north.

Among her published books are three collections of short stories and five works of literary nonfiction, including the memoir Fishcamp, the cautionary Beluga Days, and the front-lines story of climate change, Early Warming. Lord was honored as Alaska Writer Laureate for 2008-10, a term during which she traveled throughout the state to promote Alaska writers, writing, and libraries.