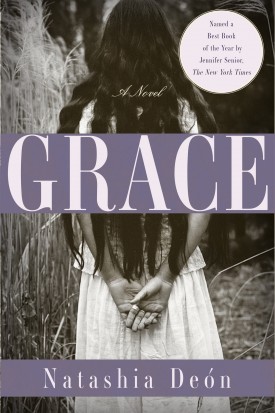 Named a New York Times Best Book of the Year, 2016

For a runaway slave in the 1840s south, life on the run can be just as dangerous as life under a sadistic Massa. That’s what fifteen-year-old Naomi learns after she escapes the brutal confines of life on an Alabama plantation and takes refuge in a Georgia brothel run by a gun-toting Jewish madam named Cynthia. Amidst a revolving door of gamblers and prostitutes, Naomi falls into a love affair with a smooth-talking white man named Jeremy. The product of their union is Josey, whose white skin and blond hair mark her as different from the others on the plantation. Having been taken in as an infant by a free slave named Charles, Josey has never known her mother, who was murdered at her birth. Josey soon becomes caught in the tide of history when news of the Emancipation Proclamation reaches her and a day of supposed freedom turns into one of unfathomable violence that will define Josey–and her lost mother– for years to come. Grace is a sweeping, intergenerational saga featuring a group of outcast women during one of the most compelling eras in American history. It is a universal story of freedom, love, and motherhood, told in a dazzling and original voice set against a rich and transporting historical backdrop.
About Natashia Deon

Natashia Deón is the recipient of a PEN Center USA Emerging Voices Fellowship and has been awarded fellowships and residencies at Yale, Bread Loaf, Dickinson House in Belgium and the Virginia Center for Creative Arts. Named one of 2013's Most Fascinating People by L.A. Weekly, she has an MFA from UC Riverside and is the creator of the popular LA-based reading series Dirty Laundry Lit. Her stories and essays have appeared in The Rumpus, The Rattling Wall, B O D Y, The Feminist Wire, and You: An Anthology of Second Person Essays, among others. She has taught creative writing for Gettysburg College, PEN Center USA, and 826LA. A practicing lawyer, she currently teaches law at Trinity Law School. Learn more at natashiadeon.com.