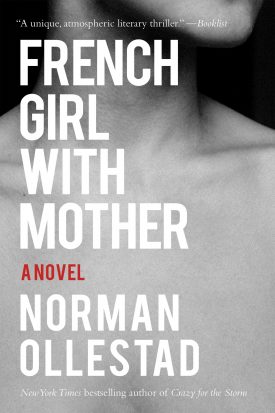 French Girl with Mother is a provocative, propulsive thriller that marries the spirit of James Salter with a hint of Patricia Highsmith and the velocity of The Art Forger.

Nathan is a young artist traveling across Europe in search of the emotional fire that has been missing from his work. He’s been deemed by his mentors and critics as technically skillful but uninspired —criticisms he fears to be true. On a Paris street, he witnesses the volatile breakup of a young French woman and her beau. Nathan pursues a meeting with the woman and it very quickly becomes evident that her provocative charisma and scathing beauty just may conjure the electricity he has been seeking for his work. So when the woman invites him to her parents’ crumbling, centuries–old chateau in the country to allow him to sketch her, he accepts, knowing that this proposition is both ill advised and thrilling.

Once enveloped by this isolated estate, a door opens to a world Nathan is not prepared for. The arrival of the young woman’s family—her mother, a volatile, voracious former ballerina, her father, a mysterious businessman with secrets of his own, and her uncle, who might be trafficking in art forgeries.

Norman Ollestad is the author of the 2009 bestseller Crazy For The Storm: A Memoir Of Survival. Ollestad's writing has received extraordinary praise from The New York Times to Entertainment Weekly, and has won admiration from esteemed voices including Russell Banks, Jim Harrison, Susan Cheever, and Carolyn See, and invited comparisons to Tobias Wolff and Jon Krakauer.

"A unique, atmospheric literary thriller with a strong sense of place that will have appeal for fans of both Scandinavian crime fiction and psychological thrillers." —Booklist

"Finely wrought; Ollestad builds a delicate tension between the characters, exposing their raw desire and exploring the concept of artistic inspiration...A quietly tense and absorbing read."—Kirkus

Praise for Crazy for the Storm

"As much a thriller as a memoir . . . gorgeously written, perfectly controlled." —Carolyn See

"Breathtaking...A portrait of a father's consuming love for his son, Crazy for the Storm will keep you up late into the night." —Washington Post Book World

"Crazy for the Storm is an absolutely compelling book which I read in one long sitting. The fact that it's true made me shudder, but then Norman Ollestad is a fine writer and every detail is convincing." —Jim Harrison

"Crazy for the Storm is a wonderful book, extremely moving and beautifully written in a spare yet richly evocative style.." —The Telegraph

"Cinematic and personal . . . Ollestad's insights into growing up in a broken home and adolescence in southern California are as engrossing as the story of his trip down the mountain." —Chicago Tribune

"The memoir is as much about a father–son relationship as it is a survival story...Ollestad says his father's life philosophy about surfing and skiing – knowing there's always a place to go and find peace, clear your mind – got him down the mountain and through life." —USA Today

"An elegant memoir as well as a transformative coming–of–age tale. When he leaves his father's limp body behind on the icy plateau—giving it a final kiss and caress as it's claimed by the snow—Ollestad takes his first perilous steps not just into survival, but into adulthood." —New York Post

"A page–turning adventure tale . . . and a meditation on manhood." —Los Angeles Magazine

"At times beautiful, at times heart–wrenching, Crazy for the Storm is a commanding read––a tale that proves the power of the human spirit can rise against any challenge, and a father's legacy can be more than he imagines." —BookPage

"A heart–stopping adventure that ends in tragedy and in triumph, a love story that fearlessly explores the bond between a father and son and what it means to lead a life without limits." —Susan Cheever