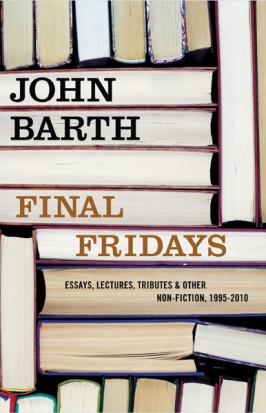 For decades, acclaimed author John Barth has strayed from his Monday-through-Thursday-morning routine of fiction-writing and dedicated Friday mornings to the muse of nonfiction. The result is Final Fridays, his third essay collection, following The Friday Book (1984) and Further Fridays (1995). Sixteen years and six novels since his last volume of non-fiction, Barth delivers yet another remarkable work comprised of 27 insightful essays.

With pieces covering everything from reading, writing, and the state of the art, to tributes to writer-friends and family members, this collection is witty and engaging throughout. Barth’s “unaffected love of learning” (San Francisco Examiner & Chronicle) and “joy in thinking that becomes contagious” (Washington Post), shine through in this third, and, with an implied question mark, final essay collection.
About John Barth

John Barth was born in Cambridge, Maryland, and attended Johns Hopkins University before writing his celebrated first novel, The Floating Opera, in 1956. Since then, he has produced more than fifteen collections of short stories, essays, and novels that have won prestigious accolades, including the National Book Award and the F. Scott Fitzgerald Award. He divides his time between Maryland and Florida.

Praise
Praise for Final Fridays "Barth's writing is as ebullient and welcoming as ever . . . This collection truly shines, however, when Barth focuses on his true passions: the craft of literature and the authors he has spent a lifetime reading, rereading, and admiring...Whatever legacy Barth may leave as a novelist, this collection confirms his position as one of the most enthusiastic readers and most important novelist-teachers of 20th-century letters."--Publishers Weekly Praise for The Friday Book and Further Fridays "There is no one else writing today who has the resources of Barth's imagination." --The New York Times Book Review "A dilettante par excellence, Barth has read intelligently and indiscriminately enough to have something interesting to say at almost any time." --Kirkus "A reader leaves The Friday Book feeling intellectually fuller, verbally more adept, mentally stimulated, with algebra and fire of his own." --The Washington Post "The pieces brought together in The Friday Book reflect Mr. Barth's witty, playful, and engaging personality . . . They are lively, sometimes casual, and often whimsical--a delight to the reader, whom Mr. Barth seems to be writing or speaking as a learned friend." --The Kansas City Star