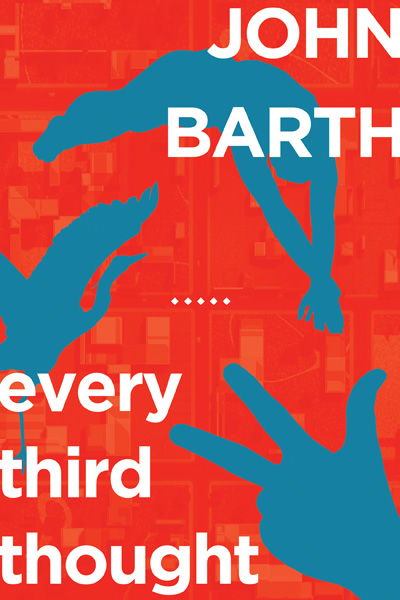 A Novel in Five Seasons

John Barth stays true to form in Every Third Thought, written from the perspective of a character Barth introduced in his short story collection The Development.

George I. Newett and his wife Amanda Todd lived in the gated community of Heron Bay Estates until its destruction by a fluke tornado. This event, Newett notes, occurred on the 77th anniversary of the 1929 stock market crash, a detail that would appear insignificant if it were not for several subsequent events.

The stress of the tornado’s devastation prompts the Newett–Todds to depart on a European vacation, during which George suffers a fall on none other than his 77th birthday, the first day of autumn (or more cryptically, fall). Following this coincidence, George experiences the first of what is to become five serial visions, each appearing to him on the first day of the ensuing seasons, and each corresponding to a pivotal event in that season of his life.

As the novel unfolds, so do these uncanny coincidences, and it is clear that, as ever, Barth possesses an unmatched talent in balancing his characteristic style and wit with vivid, page–turning storytelling.

Donald Barthelme is a winner of the National Book Award and is the author of over seventeen books, including Flying to America, City Life (one of Time Magazine’s Best Books of the Year), and Sixty Stories, which was nominated for the National Book Critics Circle Award, the PEN/Faulkner Award, and the Los Angeles Times Book Prize. He was a founder of the renowned University of Houston Creative Writing Program, where he taught for many years. He died in 1989.

Praise for Every Third Thought

"Every Third Thought has more to say about life, death, the "human condition," and maybe most particularly and surprisingly the deathlessness of love (bref: not Time's fool), than an entire constellation of newer, prettier literary lights." —Los Angeles Review of Books

"Barth delivers yet another playful romp through the lives of characters both imprisoned and liberated by their constant urge to tell stories in language that shifts shape as constantly as their lives shift spaces . . . [A] multilayered comic masterpiece." —Library Journal

"Flares of outrage over war and politics mix with funny bits about e–technology and struggles with the muse, and unabashed gratitude for friendship, the abiding love of a smart spouse, and the depthless pleasure and solace of story." —Booklist
Don't miss news & events from Counterpoint Press.
Subscribe to the newsletter today.