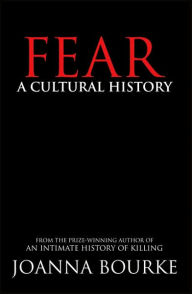 Whether we like it or not, an atmosphere of fear pervades modern culture. In America, each day is color-coded for the level of threat; newspapers fill with gloomy news of climate crisis; and the radio and TV bleat with Amber alerts, car crashes, and the war wounded.

In this groundbreaking work, award-winning historian Joanna Bourke helps us understand the landscape of fear we now navigate. Her review of the past two hundred years — from diagnosed phobias to the media’s role in creating new ones — prompts strikingly original observations about the mind and worldview of the “long twentieth century.” Blending sociocultural analysis with psychology, philosophy, and popular science, this beautifully written and exhaustively researched book offers an authoritative look at one of humankind’s most basic emotions.
About Joanna Bourke

Joanna Bourke is Professor of History at Birkbeck College, University of London. She is the prize-winning author of eleven books, including histories on modern warfare, military medicine, psychology and psychiatry, the emotions, and rape. Among others, she is the author of Dismembering the Male: Men's Bodies, Britain, and the Great War (1996), An Intimate History of Killing (1999), Fear: A Cultural History (2005) and Rape: A History from the 1860s to the Present (2007). Her book, What it Means to be Human: Reflections from 1791 to the Present was published by Virago in 2011. In addition to Wounding the World: How Military Violence and War-Play Invade our Lives (Counterpoint and Virago, November 2014), in June 2014 she publishes The Story of Pain: From Prayer to Painkillers. Her books have been translated into Chinese, Russian, Spanish, Catalan, Italian, Portuguese, Czech, Turkish, and Greek. An Intimate History of Killing won the Wolfson Prize and the Fraenkel Prize. Her 40-CD audio history of Britain, entitled "Eyewitness" won the Gold for the Best Audio Production for Volume 1910-1919, Gold for the Best Audio Production for Volume 1940-1949, and the Gold for the Most Original Audio for all 10 volumes. She is a frequent contributor to TV and radio shows, and a regular correspondent for newspapers.

Praise
"Bourke performs a sterling service, painstakingly picking over usually bypassed sources and materials for hidden clues as to what scares us."