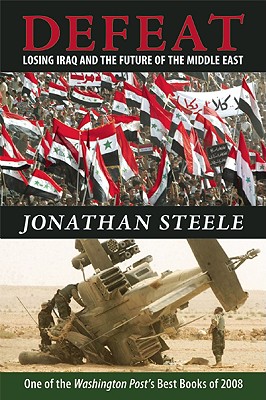 Losing Iraq and the Future of the Middle East

As the dreadful reality of the coalition’s defeat in Iraq begins to sink in, one question dominates Washington and London: Why? In this controversial new book, Jonathan Steele provides a stark and arresting answer: Bush and Blair were defeated from the day they decided to occupy the country. Steele describes the centuries of humiliation that have scarred the Iraqi national psyche, creating a powerful and deeply felt nationalism and spreading cultural landmines along the road to winning Baghdad. Steele shows for the first time how the invasion and occupation were perceived by ordinary Iraqis, whose feelings and experiences were completely ignored by Western policymakers. The result of such arrogance, Steele demonstrates, was a failure that will forever resonate with such dark chapters of American and British history as the Vietnam War and the Suez Canal crisis. Blending vivid reportage, informed analysis, and sweeping historical narrative, Defeat is the definitive post–mortem on this pivotal catastrophe.

Jonathan Steele is a columnist for The Guardian, as well as a foreign correspondent and author. Since 9/11 he has reported from Afghanistan and Iraq as well as on the Israeli/Palestinian conflict.

Praise
"Critics of the U.S. and British invasion of Iraq often begin with the faulty (or deliberately skewed) intelligence concerning weapons of mass destruction. Even those politicians who continue to support the venture are willing to criticize the military and political mistakes that followed the initial thrust into Iraq. Steele, a senior correspondent for the Guardian, offers a deeper and more damning indictment. He asserts that the effort was preordained to fail, doomed by the twin sins of ignorance and arrogance. At the core of these sins was the inability of policy makers to comprehend that even the best–intentioned and "benign" occupation of a foreign nation usually means humiliation for the occupied and will trigger eventual resistance. Steele suggests that a rapid overthrow of Hussein followed by a rapid withdrawal of American and British forces could have resulted in a successful, or at least a tolerable, outcome. Instead, the invaders chose to "rebuild" Iraqi institutions, resulting in a prolonged stay. Although some of Steele's criticisms may be unfair, he presents a well–argued work demanding serious consideration."—Jay Freeman,Booklist<//p>