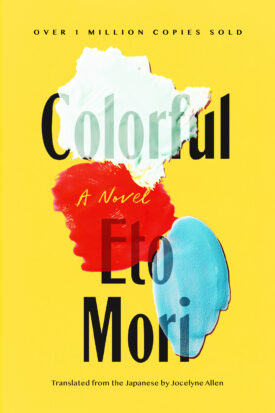 A beloved and bestselling classic in Japan, this groundbreaking tale of a dead soul who gets a second chance is now available in English for the very first time.

“Congratulations, you’ve won the lottery!” shouts the angel Prapura to a formless soul. The soul hasn’t been kicked out of the cycle of rebirth just yet–he’s been given a second chance. He must recall the biggest mistake of his past life while on ‘homestay’ in the body of fourteen-year-old Makoto Kobayashi, who has just committed suicide. It looks like Makoto doesn’t have a single friend, and his family don’t seem to care about him at all. But as the soul begins to live Makoto’s life on his own terms, he grows closer to the family and the people around him, and sees their true colors more clearly, shedding light on Makoto’s misunderstandings.

Since its initial release over twenty years ago, Colorful has become a part of the literary canon, not only in Japan–where it has sold over a million copies–but around the world, having been translated into several different languages. Now, Eto Mori’s beloved classic is finally available in English.

Praise
"Unlike anything I've ever read before, Colorful is a fresh and bold story that asks big and important questions about death, mental health, and most importantly, what it means to truly live. Makoto is a singular character whose struggles will be deeply relatable to many young people. A truly special novel." ––Jasmine Warga, Newbery Honor award-winning author of Other Words for Home and My Heart and Other Black Holes

"Certain books, you know the ones, get under your skin. I was extraordinarily moved by Eto Mori's Colorful. It was as if Makoto was speaking directly into my own ear in the dark. This intimate, brave novel has already been read by millions in Japan. It cries out to be read by millions more.” ––Peter Orner, author of Maggie Brown & Others

"Through Jocelyne Allen's translation of the Japanese classic Colorful, author Eto Mori invites a new generation of readers to view the coming-of-age experience, though rife with travails, with heart and good humor. Whether in Japan or the United States, readers will find space in these pages to laugh, reflect––and keep breathing." —Kit Frick, author of See All The Stars & I Killed Zoe Spanos