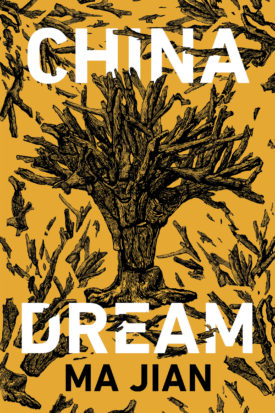 Blending fact and fiction, this darkly comic fable “may be the purest distillation yet of Mr. Ma’s talent for probing the country’s darkest corners and exposing what he regards as the Communist Party’s moral failings” (Mike Ives, The New York Times).

Called “Red Guards meet Kurt Vonnegut . . . powerful!” by Margaret Atwood on Twitter, China Dream is an unflinching satire of totalitarianism. Ma Daode, a corrupt and lecherous party official, is feeling pleased with himself. He has an impressive office, three properties, and multiple mistresses who text him day and night. After decades of loyal service, he has been appointed director of the China Dream Bureau, charged with replacing people’s private dreams with President Xi Jinping’s great China Dream of national rejuvenation. But just as he is about to present his plan for a mass golden wedding anniversary celebration, his sanity begins to unravel. Suddenly plagued by flashbacks of the Cultural Revolution, Ma Daode’s nightmare visions from the past threaten to destroy his dream of a glorious future.

Exposing the damage inflicted on a nation’s soul when authoritarian regimes, driven by an insatiable hunger for power, seek to erase memory, rewrite history, and falsify the truth, China Dream is a dystopian vision of repression, violence, and state–imposed amnesia that is set not in the future, but in China today.

FLORA DREW's translations from the Chinese include Ma Jian's Red Dust, The Noodle Maker, Stick Out Your Tongue, Beijing Coma and The Dark Road.

Ma Jian was born in Qingdao, China. He is the author of seven novels, a travel memoir, three story collections, and two essay collections. His work has been translated into twenty-six languages. Since publication of his first book in 1987, all his work has been banned in China. He now lives in exile in London.

FLORA DREW's translations from the Chinese include Ma Jian's Red Dust, The Noodle Maker, Stick Out Your Tongue, Beijing Coma and The Dark Road.
Praise
Praise for China Dream

Long–listed for the 2020 Best Translated Book Award
O, The Oprah Magazine, 1 of 25 Books to Give the World's Best Dad on Father's Day
An Entertainment Weekly New & Notable Hot Fiction Title
Library Journal, One of the Best Books of the Year in World Literature
A Financial Times Best Book of the Year
A The Millions Most Anticipated Book of the Month and Year
One of Vulture's Spring Books to Watch Out For

"Teaming up with fellow dissident Ai Weiwei, who created the book’s jacket artwork, Ma demonstrates once more the power of fiction to speak truth to those who would silence their critics." —Time, 1 of the 100 Must–Read Books of the Year

China Dream is a sharper political allegory than Mr. Ma’s earlier novels. It crackles with bruising satire of Chinese officialdom, and an acerbic wit that vaguely recalls Gary Shteyngart’s sendup of Russian oligarchs in Absurdistan, or even Nikolai Gogol’s portraits of Russia’s provincial aristocrats in Dead Souls . . . China Dream may be the purest distillation yet of Mr. Ma’s talent for probing the country’s darkest corners and exposing what he regards as the Communist Party’s moral failings."" —Mike Ives, The New York Times

"Mr. Ma's critique of the totalitarian mindset recalls that of Soviet–era dissidents . . . tragic and elegiac . . . garnished with both horror and tenderness." —The Economist

"Ma Jian has been a courageous critic of President Xi Jinping’s regime . . . Ma Daode, the main character, is director of the Chinese Dream Bureau, which is as creepily Orwellian as it sounds and makes Mao’s Cultural Revolution look like minor tinkering.” –Max Davidson, The Irish Mail

"A short, highly satirical work no less excoriating than any of Ma’s previous fiction, translated in a graphic, stylish manner by [Flora] Drew, [the author's wife and longtime translator]." —Catherine Taylor, Financial Times

"Ma has a marksman’s eye for the contradictions of his country and his generation, and the responsibilities and buried dreams they carry. His perceptiveness, combined with a genius for capturing people who come from all classes, occupations, backgrounds and beliefs; for identifying the fallibility, comedy and despair of living in absurd times, has allowed him to compassionately detail China’s complex inner lives. Censoring his novels and banning his name have been Beijing’s cynical response to Ma’s artistry, and to the human lives that the novelist cannot forget, even as the Chinese Dream envelops them." —Madeleine Thien, author of Do Not Say We Have Nothing

"Jian, whose work has been banned in China for the past 30 years, creates a dystopian present–day China in this narrative about power, history and the effects of materialism on a society." —Annabel Gutterman, Time, 1 of the 10 New Books You Should Read This Month

"A startling exposé of China’s moral crises in the rare dystopian book that is set in the present–day, rather than the future. That it’s an absurd, wild ride makes its eye–opening effect that much more unsettling." —David Canfield, Entertainment Weekly, 1 of 20 New Books to Read This Month

"Weaving together traditional wisdom and contemporary references, the book creates a richly textured world as its protagonist confronts two versions of himself: the youth who was prepared to kill for ideological purity and the middle–aged man who believes that an unhindered future depends on erasing the past." —The New Yorker

"Ma surreally collapses past and present, undoing Xi’s work with every ironic reversal and juxtaposition." —Boris Kachka, Vulture, 1 of 8 New Books You Should Read This Month

"A bold, searing indictment of present–day China and a lyrical exposé of the false utopia created by the Communist Party and its current leader–for–life, Xi Jinping . . . [China Dream] is an inventive yet powerful confrontation of China’s past and present." —Publishers Weekly (starred review)

"[A] deeply felt satire . . . Perhaps most absurd, Ma Jian seems to suggest, is the government's attempts to bury a past filled with so many skeletons. There will always be people like Ma Daode who remember even what they'd rather forget." —Hank Stephenson, Shelf Awareness

"Ma (The Dark Road, 2013) has forged an impressive literary career by criticizing the government of the country of his birth, from which his work has been banned for 25 years. His latest novel presents his sharpest and most intimate vision yet, one that delves into the everyday lives of the wealthy elite . . . In his startling and irreverent parody, Ma finds compassion amid the sex and violence that shape a history of injustice and a nation's vulnerability." —Booklist (starred review)

“A chilling dystopian novel, China Dream will leave you breathless and shaken. Ma Jian’s brilliance is astounding and reverberates with a sort of cryptic, jaded humor throughout the book with an almost physical insistence.” —Kelsey Chen, The Harvard Crimson

"It’s a subversive, dark tale that seems to tell a dystopian vision of China’s future but really is a cultural commentary on the country’s status today." —Swapna Krishna, SyFy Wire

"[Ma Jian] is one of the most respected and discussed of all contemporary Chinese authors . . . His devastating wit and experimental style are used to deconstruct both the history and the political reality of everyday life in China." —World Literature Today

"China Dream is a magnificent work in its unerring take on China, Ma Jian giving voice to the ghosts and memories of a silenced nation." —Mike Cormack, South China Morning Post Magazine

"China Dream’s strengths lie in its description of the horrors of the Cultural Revolution—Ma Jian has a Proustian sensibility with the brutal eye of Isaac Babel." —Nishant Batsha, Ploughshares

"With brutal and delicious irony, China Dream deconstructs the falsity of national pride build on sanitized, idealized visions of the past, contrasting dreams of a golden, utopian China with the gruesome reality of history . . . It’s ruthless and sometimes horrifying satire of the danger posed by a government that believes it owns history, and a cautionary tale to any who would think to ignore such painful truths. It’s a book for today, and a book for the world.” —Sam Reader, The B&N Sci–Fi and Fantasy Blog

"Ma Jian’s brutal political discourse would be nothing without the power and creativity he wields as a writer. His level of detail is damning." —Katie Smith, Barrelhouse

"In a not–too–unfamiliar dystopic China, Ma Daode is appointed head of the China Dream Bureau, a government agency that erases civilians’ dreams and replaces them with the president’s authoritarian propaganda for a better China. In a series of dream sequences, Ma Daode plans an epic golden wedding anniversary for him and his wife but is simultaneously plagued by his own violent and tragic memories of the Cultural Revolution. As Ma Daode’s past bubbles to the surface, threatening his inner peace and adherence to the president’s dream of China’s 'rejuvenation,' Ma Jian crafts a hauntingly frantic but poignant narrative about retribution and reconciliation. As he comes to realize that the only way to be at peace in his mind is to erase these memories once and for all, Ma Daode’s confrontation with his country’s history serves as a painful but necessary exploration of the effects of totalitarian and authoritarian regimes. Ma Jian’s prose, banned in China, is unflinching and razor–sharp, combining political critique with a gripping narrative that will leave you devouring the final pages." —Morgan McComb, The Raven Book Store (Lawrence, KS)

"As horrifying and unbelievable as this short novel was, the impact was profound. Ma Jian's satirical but real analysis of the upper echelons of the Chinese Communist wealthy and the undeniable need for the human spirit to be granted freedom are loud and deep."—Lauren Nopenz Fairley, Curious Iguana (Frederick, MD)