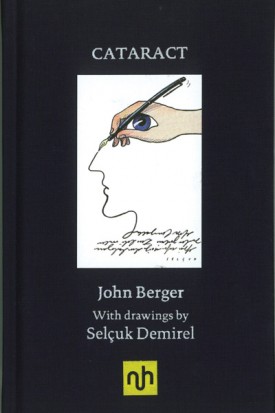 Some Notes After Having a Cataract Removed

“Behind my right eye hangs a burlap cloth; behind my left eye there’s a mirror. . . Before the burlap the visible remains indifferent; before the mirror it begins to play.”

What happens when an art critic loses some of his sight to cataracts? What wonders are glimpsed once vision is restored? In this impressionistic essay written in the spirit of Montaigne, John Berger, whose treatises on seeing have shaped cultural and media studies for four decades, records the effects of cataract removal operations on each of his eyes. The result is an illuminated take on perception. Berger ponders how we can become accustomed to a loss of sense until a dulled world becomes the norm, and describes the sudden richness of reawakened sight with acute attention to sensory detail. This wise little book beckons us to pay close attention to our own senses and wonder at their significance as we follow Berger’s journey into a more vivid, differentiated way of seeing. Demirel’s witty illustrations complement the text, creating a mini-world where eyes take on whimsical lives of their own. The result is a collaborative collectors’ piece perfect for every reader’s bedside table. “Cataract from Greek kataraktes, meaning waterfall or portcullis, an obstruction that descends from above.’ Notes and reflections by one of our great soothsayers of seeing, John Berger, on the minor miracle of cataract surgery. With drawings by the Turkish artist Selcuk Demirel. ‘If the doors of perception were cleansed every thing would appear to man as it is, infinite.” –William Blake
About The Authors


TERRY HUNT is a professor of anthropology at the University of Hawai'i at Manoa, where he also lives. He has spent the past 35 years doing archaeological field research in the Pacific islands, and both his teaching and research efforts at Easter Island and elsewhere have been honored by the University of Hawaii Board of Regents Medal for Excellence in Research. CARL LIPO is a professor of archaeology at California State University Long Beach. In 2010 he was awarded the Distinguished Faculty Scholar and Creative Achievement Award for CSULB. He lives in Long Beach, California.