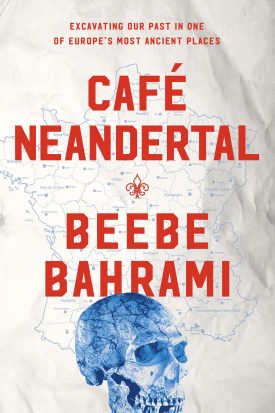 Excavating Our Past in One of Europe's Most Ancient Places

“Award-winning writer Bahrami is a delightful guide in this thoroughly enjoyable look into the research and recovery of a group of Neandertal remains in the French Dordogne region . . . Her wide interests in travel, memoir, food, wine, and more make this exceedingly engaging title more like a French version of Under the Tuscan Sun.” —Booklist (starred review)

Centered in the Dordogne region of southwestern France, one of Europe’s most concentrated regions for Neandertal occupations, Café Neandertal features the work of archaeologists doing some of the most comprehensive and global work to date on the research, exploration, and recovery of our ancient ancestors, shedding a surprising light on what it means to be human.
About Beebe Bahrami

BEEBE BAHRAMI is the author of The Spiritual Traveler Spain and Historic Walking Guides Madrid. Her work has appeared in Archaeology, Wine Enthusiast, Bark, The Pennsylvania Gazette, National Geographic Books, and Michelin Green Guides, among other publications. She has written two travel apps, The Esoteric Camino France and Spain and Madrid Walks, and maintains two blogs, Café Oc, on life in the Dordogne, and The Pilgrim's Way Café, dedicated to exploring the world on foot. beebebahrami.weebly.com.

Praise
Praise for Café Neandertal "[A] beautifully crafted book . . . Bahrami is a wonderful writer who brings many of the attributes of the novel to a clear and compelling narrative that encapsulates a snapshot of the state of our current knowledge about Neanderthals. Peopled with a vast cast of fascinating characters, from village locals to querulous scientists, it brings to life the excitement of unearthing the past and describes the 'new, more enlightened era in studies of human evolution' that is dawning." --Cosmos Magazine "Highly recommended for archaeology and prehistory buffs and armchair travelers." --Booklist, starred review "With a pilgrim's reverence and a scientist's exactitude, Bahrami captures the textures, smells, and sounds of the excavation sites and adjacent towns . . . At the heart of this story is Bahrami's trek through densely overgrown prehistoric territory in search of a visceral connection to and deeper understanding of all humankind." --Publishers Weekly "Written with all the flair and enthusiasm of an experienced writer eager to share her love of her subject." --Kirkus Reviews "Ms. Bahrami has written a very readable book, blending personal travel experience and history in a relatively off-the-radar swath of France. She seamlessly marries archeology and Gallic culture that brings the region's people and history to life." --David Farley, author of An Irreverent Curiosity "We need to understand who we were in order to know where we are headed. In the caves and forests of France's Dordogne region, Beebe Bahrami guides us on a haunting encounter with what may be our earlier selves, a creature whose passions and powers and motives we have only begun to fathom. A fascinating read for anyone who claims to be human." --Peter Stark, author of Astoria: John Jacob Astor and Thomas Jefferson's Lost Pacific Empire; A Story of Wealth, Ambition, and Survival