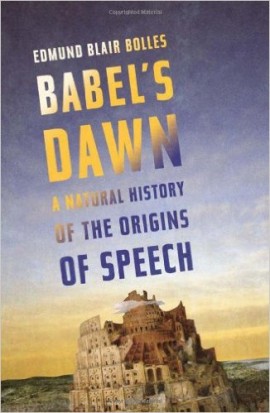 A Natural History of the Origins of Speech

Babel’s Dawn is a saga covering six million years. Like a walk through a natural history museum, Bolles demonstrates how members of the human lineage came to speak. Beginning with a scene of the last common ancestor ignoring a bird as it flies by, he guides us through generations, illuminating how it became possible for two Homo sapiens to not only acknowledge the songbird, but to also discuss the meaning of its song.

Tracing the rise of voluntary vocalizations as well as the first word, phrases, and sentences, Bolles works against the common belief that the reason apes cannot speak is they are not smart enough. In this groundbreaking work, Bolles purposes that we now have substantial evidence that this age–old idea can no longer stand. With concrete portrayals of living individuals interwoven with evidence, data, and theory, Babel’s Dawn is a powerful account of a great scientific revolution.

Edmund Blair Bolles is a former Peace Corps teacher who grew up in Washington, D.C., Paris, France, and Toledo, Ohio. His undergraduate degree is from Washington University in St. Louis, and he has a Masters in English from the University of Pennsylvania. He lives in New York City.