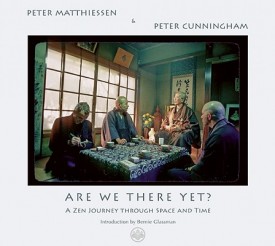 Are We There Yet?

A Zen Journey Through Space and Time

The journey of Buddhism over centuries, from India to China and then to Japan, is the stuff of mythology. But now, in our own time, we have witnessed and documented its historic crossing of the Pacific and its subsequent evolution in the Americas and Europe.

In 1982, writer Peter Muryo Matthiessen, the first dharma successor of Roshi Bernie Glassman, traveled with Glassman to pay respects to the teachers in their lineage, some of the great living Zen masters of twentieth–century Japan. What took place was an important meeting of minds representing the past, present, and future of Zen practice, an intimate connection between ancestors and descendants marking a critical point in the Zen journey from the East to the West. This historic event was captured in the moment by the selective lens of Peter Cunningham. Matthiessen’s exquisite poetic accounts of this pilgrimage, which formed a part of his book Nine–Headed Dragon River, accompany the photos.

Peter Matthiessen was an American novelist, naturalist, wilderness writer, CIA agent, and co-founder of the literary magazine The Paris Review. A prominent environmental activist, his nonfiction featured nature and travel, notably The Snow Leopard, and American Indian issues and history, such as a detailed and controversial study of the Leonard Peltier case, In the Spirit of Crazy Horse. His fiction was adapted for film: the early story Travelin' Man was made into The Young One by Luis Buñuel and the novel At Play in the Fields of the Lord into the 1991 film of the same name.

In 2008, at age 81, Matthiessen received the National Book Award for Fiction for Shadow Country, a one-volume, 890-page revision of his three novels set in frontier Florida that had been published in the 1990s. He died in 2014.