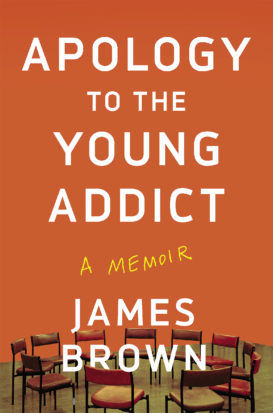 Apology to the Young Addict

Husband, addict, father, skeptic. Now sixty—with years of sobriety under his belt—the celebrated author of The Los Angeles Diaries and This River returns with his most moving work yet.

Opening with the tragic tale of an elderly couple consumed by opioid addiction and moving through the horrors of a Las Vegas massacre to the loss of a beloved sponsor, these essays draw on Brown’s personal journey to illustrate how an individual life, in all its messiness and charm, can offer a blueprint for healing. From writing about finding a new path in life while raising three sons, to making peace with the family whose ghosts have haunted him, and helping the next generation of addicts overcome their disease, this haunting and hopeful book is a reinvention of the recovery story and a lasting testimony from the master of the modern memoir.

“The third panel in Brown’s masterwork triptych on addiction from youth to sixty, Apology to the Young Addict also accomplishes at last a staggeringly rare mercy—on the ghosts of memory, the ravages of disease, the brutal hypocrisies of religion, and finally—most shockingly—on himself.” —Gina Frangello, author of Every Kind of Wanting and A Life in Men

Praise
"James Brown's Apology to the Young Addict does not just breathe new life into addiction writing, it does so with enough grace, heart, and grab-you-by-the-throat style to transcend the genre and qualify as genuine literature. These beautiful essays will serve as balm for survivors of the opioid crisis, those still struggling to make it out, and pretty much anyone else trying to stay sane in these insane times. Prose-wise--with all due respect to his late namesake--James Brown has earned his title as the Godfather of Junkie Soul." --Jerry Stahl, author of Permanent Midnight

"James Brown, already among the best memoirists in America, has surpassed his own high standards in Apology to the Young Addict. This superbly written book is about addiction, yes, but it is equally a book about courage, perseverance, love, desperation, recovery, and healing. More than anything, it is a book that reminds us, again and again, of the power of storytelling. In the pages of this heartbreaking but oddly exhilarating memoir, Brown deploys his narrative skills with precision, grace, complexity, and masterfully controlled intensity of emotion. What a fine piece of work." -Tim O'Brien, author of The Things They Carried