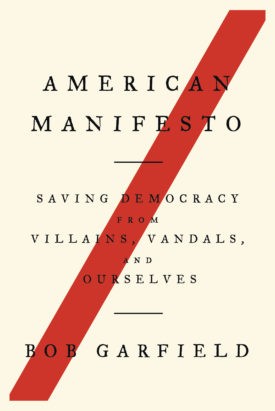 Saving Democracy from Villains, Vandals, and Ourselves

Do you fear for our democracy? Are you perplexed by Trumpism? Are you ready to throw in the towel? Don’t! This is your guidebook to reassembling our hyperpolarized American society in six (not-so-easy) steps, written by the cohost of WNYC’s On the Media.

As is often observed, Trump is a symptom of a virus that has been incubating for at least fifty years. But not often observed is where the virus is imbedded: in the psychic core of our identity. In American Manifesto: Saving Democracy from Villains, Vandals, and Ourselves, popular media personality Bob Garfield examines the tragic confluence of the American preoccupation with identity and the catastrophic disintegration of the mass media. Garfield investigates how we’ve gotten to this moment when our identity is threatened by both the left and the right, when e pluribus unum is no longer a source of national pride, and why, when looking through this lens of identity, the rise of Trumpism is no surprise. Overlaying this crisis is the rise of the Facebook-Google duopoly and the filter bubble of social media, where identity is insular and immutable. But fear not! WNYC’s On the Media cohost Garfield has ideas about how we may counter the forces of fragmentation–the manifesto itself: six steps to take to reassemble our fractured society. A quick, fascinating read, American Manifesto offers not only a vision of a country in extremis, but also a plan for how to address the ways in which our democracy is imperiled. Provocative, profound, and sometimes hilariously profane, American Manifesto is a call to action like no other.

BOB GARFIELD is the cohost of public radio's weekly Peabody Award-winning On the Media and has been a globally prominent media and advertising critic for three decades. He is also the founding cohost of Slate's podcast on language, Lexicon Valley. Garfield has been a columnist or contributing editor for The Washington Post Magazine, The Guardian, and the op-ed page of USA Today. He has also written for The New York Times, Playboy, The Atlantic, Sports Illustrated, and Wired. He lives in the Washington, D.C., area.

"Short, specific, and droll. It is very much worth reading, for ideas about the next stage in the world's recovery from failed, weak, and in other ways troubled media systems." -James Fallows, The Atlantic

"Longtime media critic and journalist Garfield examines the salient factors that shaped American politics prior to the 2016 election and that continue to influence voter attitudes as the 2020 campaigns get underway . . . Garfield offers practical advice on how to transform outrage into positive action. Fans of his Peabody Award-winning public radio program, "On the Media," will recognize Garfield's bold yet grounded humor, while his trenchant analysis and surprisingly hopeful vision will motivate readers to pay attention and get involved." --Booklist

"In American Manifesto, Bob Garfield bares our national soul, and it's hellishly dark. We've divided ourselves by everything under the sun, eroding the idea of America as the common home of the many. With wit, passion, and insight, Garfield dissects the problem and issues a call to action. He will convince you that it's time to get out the door." --Thomas E. Patterson, Bradlee Professor of Government and the Press at Harvard University and author of How America Lost Its Mind

"In a time when explanations seem to be in short order and solutions virtually extinct, books like Bob Garfield's American Manifesto are a godsend. Here is a serious, probing work that gets to the heart of why we're in this political and cultural crisis and, miraculously enough, provides plausible solutions as to how to find our way out. Absolutely necessary reading." --Jared Yates Sexton, author of The Man They Wanted Me to Be

"Bob Garfield speaks truth not just to power, but to the dangerously disempowered. Unflinchingly direct yet courageously sympathetic, his American Manifesto deconstructs the most infectious media virus of all time. Here is the vaccination that our collective immune system so desperately needs." -Douglas Rushkoff, author of Present Shock and Team Human